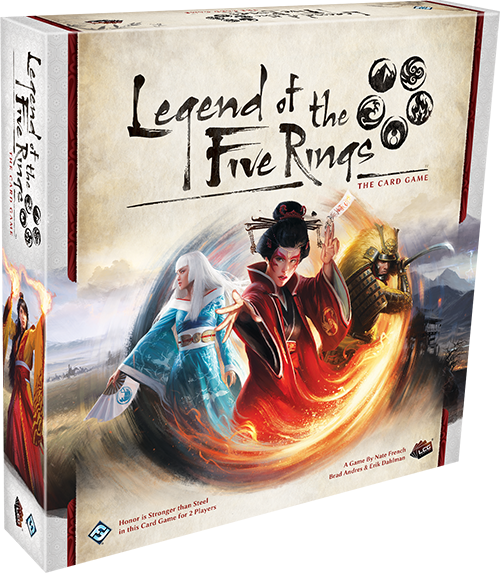 Fantasy Flight Games has finally unveiled new LCG (Living Card Game) set information for their new Legend of the Five Rings game and it looks fantastic! I have been a long time player of L5R since the Imperial Edition and its been a while since i have been enthralled by the lore and characters of Rokugan. I even had the complete set of the L5R novels during my college days. Here’s hoping that Fantasy Flight Games has brought their A game for this new version of L5R. 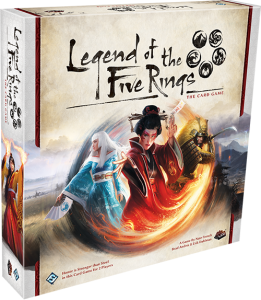 Check out the introduction story to this all new Rokugan:

From the Shadowlands in the south to the Burning Sands in the north, from the Twilight Mountains in the west to the Islands of Spice and Silk in the east, Rokugan, the Emerald Empire, has stood for over one thousand years thanks to the seven Great Clans who serve the Emperor. As guardians and politicians, each clan fulfills their role in society and are as varied as they are powerful. But all are bound by the same code of honor, the way of the warrior, the code of Bushid?. Honor is valued above all else, and a misspoken remark can be just as fatal as an enemy’s blade.

It is in this context that the clans battle. From the ancient rivalry of the Crane and Lion to the Crab’s daily skirmishes with the Shadowland forces always threatening to extend their reach into Rokugan, the clash of swords and pull of politics is a daily occurrence.

But while conflict between the clans has dominated Rokugan for over one thousand years, the true threats await in the dark, known only to a few. The five elements of Air, Earth, Fire, Water, and Void are in a precarious balance, and the land of Rokugan teeters on the brink of chaos.

Fantasy Flight Games is proud to announce the upcoming release of the Legend of the Five Rings: The Card Game Core Set. Originally released in 1995 as a collectible card game, Legend of the Five Rings has since thrived with its unique setting, engaging gameplay, and enthusiastic player base. Now players new and old alike can experience Rokugan like never before in the Living Card Game® format.

Legend of the Five Rings: The Card Game is a player-influenced LCG® that sees two players take on the role of one of the seven Great Clans of Rokugan, vying for military and political control of the land while maintaining Rokugan society’s strict code of honor.

Each player commands their forces with two separate decks: A Dynasty Deck fills their provinces with characters and holdings and a Conflict Deck consisting of tactics, maneuvers, followers and attachments that can be used to turn the tide in a struggle for supremacy. During a game, players will engage in conflicts, both political and military based, with the goal of breaking their opponent’s stronghold and winning the game. But the rules of society are absolute, and even in the fire of battle and heat of Rokugan’s courts, clans must remember the tenets of Bushid?, lest they lose everything in their single-minded pursuit of glory.

Important Note: Three copies of The Legend of the Five Rings: The Card Game Core Set are needed to have a complete playset of cards.

For more information on how to play the new LCG Legend of the Five Rings, visit the original link here: https://www.fantasyflightgames.com/en/news/2017/4/19/legend-of-the-five-rings-the-card-game/