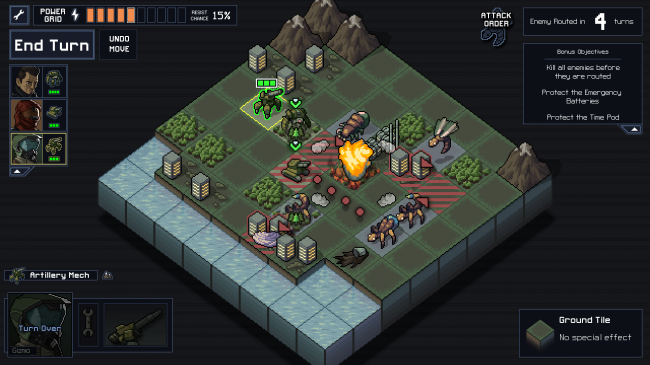 FTL: Faster Than Light developer Subset Games has unveiled their new project and it’s a turn-based strategy game called Into The Breach. The game looks like a throwback to SNES era/GBA style graphics complete with an isometric grid. I’m hoping for a Front Mission/Advance Wars meets Pacific Rim kind of vibe personally.

So far, not much has been announced except for the following tidbit:

“All enemy attacks are telegraphed in minimalistic, turn-based combat. Analyze your opponent’s attack and come up with the perfect counter every turn,” it says. “Find powerful new weapons and unique pilots as you battle the Vek infestation across Corporate-Nation islands.” And when things go sideways, as they surely will, you can send help backwards through time, to resume the fight in another timeline.”

Surprise! Into the Breach also has a time travel mechanic that allows you to continue the fight in a another timeline, how exactly this will work is still unannounced but i have to say it does make me more excited for this game.

Some early screenshots of Into the Breach are shown below:

No launch date has been set as the devs say they will launch it on Steam “when they are ready”.