Sony PlayStation (Asia) has just unveiled the new South East Asia, which includes the Philippines, retail prices for the PS4 models and their release dates: 17th September (PS4 Slim) and 10th November for the PlayStation 4 Pro. 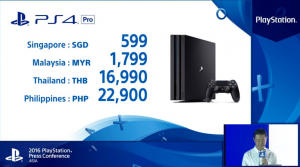 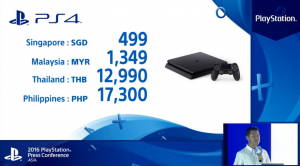 The new slimmer PS4 will be priced at 17.3K pesos while the new slightly bigger Playstation 4 Pro will cost Pinoy Gamers a cool 22.9K pesos.
So, it boils down to 1 question, and my answer is going to be very straightforward.

So, SHOULD Pinoy Gamers buy the PS4 Pro?
If you have a 4K TV, i highly suggest you get the PS4 Pro to maximize your investment.
If you don’t have a 4K TV, i still highly suggest you get the PS4 Pro as framerates will be better. Unless budget is an issue then just go with the slim PS4.
If you don’t care about playing games in 4k, and just want to play on Playstation VR then still get the PS4 Pro as it will make games less laggy thus reducing motion sickness.
If you are a budgte conscious parent buying a PS4 for their kid (Lucky!) then a plain old PS4 Slim should do. If he wants a Pro, tell him to get good grades. grow up so he can buy his own. Seriously. =)

Gamers will be Gamers. We want the best tech stuff. The 5K peso difference between the 2 models shouldn’t be an issue if you wanna play at this level, if you’re concerned about your budget, then cut down on that Starbucks and have less food deliveries/drinking sessions with your friends. You will be spending thousands of hours on this baby, if you’re lucky and you want it to be the top of the line.

Oh, You should know that the PS4 Pro doesn’t support 4K bluray as Sony has been pushing for online content, so that might be an issue that you care about.

2 thoughts on “Sony PS4 Slim and Playstation 4 Pro Philippine prices announced, but should you buy it?”