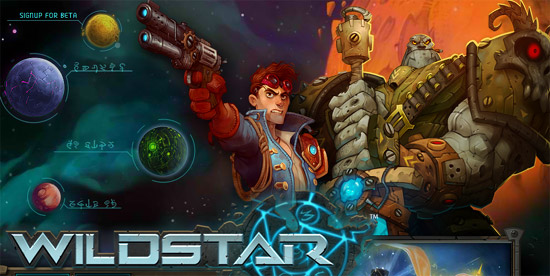 WildStar is the newest sci-fi MMORPG online game from developer Carbine and publisher NCSoft. Carbine is made up of ex-Blizzard developers and at first glance, Wildstar looks to fill in the void of a World of Starcraft-style MMORPG. The art style alone hooked me on this awesome looking MMO and i cant wait to be able to join the Beta!

Check out our comprehensive media coverage and system requirements list for WildStar:

Wildstar Character Types
According to Neoseeker: Granok is that big golem in the Wildstar trailer, he’s a Warrior class who relies on Adrenaline and Fuel Cells to support his power. “Adrenaline will drain once you are out of combat. Fuel Cells, on the other hand, regen on their own.”

We also have the Human classes with the man with two guns, and Aurin is the female character. The man you see in the trailer is a Spellslinger armed with a pair of magic pistols and a teleport ability. Spellslinger’s attack depends on Charge and Arcana. Charge determines how powerful your attack is and Arcana affects Spellslinger’s magic skills.

Aurin is the female character and the one in the trailer is Esper class and she uses Combo Points and Mana. Combo Points increases the effectiveness of certain abilities and Mana is obviously for casting a magic.