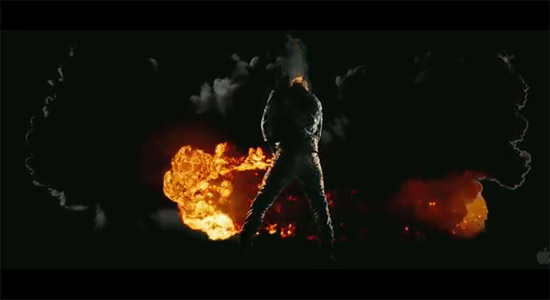 Watch the Ghost Rider: Spirit of Vengeance Trailer starring Nicolas Cage. Yes, Nick Cage is back and that is enough to give this film a large crash-and-burn potential even though it seems to have improved over the original in a couple of ways.

Ghost Rider: Spirit of Vengeance Movie Summary
Nicolas Cage returns as Johnny Blaze in Columbia Pictures’ and Hyde Park Entertainment’s Ghost Rider: Spirit of Vengeance. In the successor to the original Ghost Rider, Johnny – still struggling with his curse as the devil’s bounty hunter – is hiding out in a remote part of Eastern Europe when he is recruited by a secret sect of the church to save a young boy (Fergus Riordan) from the devil (Ciaran Hinds).

At first, Johnny is hesitant to unleash the power of the Ghost Rider, but it is the only way to protect the boy – and possibly rid himself of his curse forever. Ghost Rider: Spirit of Vengeance is directed by the duo of Mark Neveldine and Brian Taylor. Screenplay by Scott M. Gimple & Seth Hoffman and David S. Goyer. Story by David S. Goyer. Based on the Marvel Comic book. Produced by Steven Paul, Ashok Amritraj, Michael De Luca, Avi Arad, and Ari Arad.