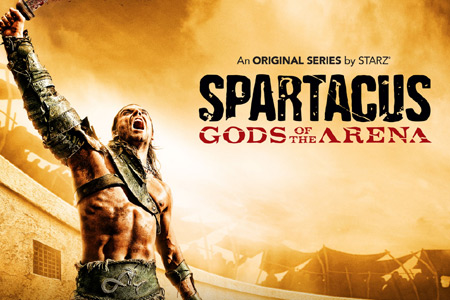 Spartacus: Gods of the Arena is a television mini-series produced by Starz and first shown on January 21, 2011. Spartacus: Gods of the Arena is a prequel to Spartacus: Blood and Sand and as such chronicles the bloody story of the house of Batiatus and the town of Capua before the arrival of Spartacus. Reprising their roles from the original series are favorites John Hannah as Batiatus, Lucy Lawless who is perfect as Batiatus’ wife Lucretia, Peter Mensah as Oenomaus, and Manu Bennett as a young Crixus. Andy Whitfield, who has been reported to be dealing with a serious medical condition, will make a brief appearance as Spartacus.

Spartacus: Gods of the Arena revolves around the character Gannicus, played by Dustin Clare, who was the second gladiator to become Champion of Capua.

The House of Batiatus is on the rise, basking in the glow of its infamous champion Gannicus, whose skill with a sword is matched only by his thirst for wine and women. These are the times a young Batiatus has been waiting for. Poised to overthrow his father and take control, he’ll freely betray anyone to ensure his gladiators are in the highest demand. And he’ll have his loyal and calculating wife Lucretia by his side for every underhanded scheme, drawing on the brazen talents of her seductive friend Gaia when it counts. Together, they will stop at nothing to deceive the masses, seize power, and bleed Capua dry in this audacious prequel to “Spartacus: Blood and Sand.”

Premiering, January 21 “Spartacus: Gods of the Arena,” the highly anticipated prequel to “Spartacus: Blood and Sand,” tells the story of the original Champion of the House of Batiatus. Joining returning stars, John Hannah (The Mummy, Four Weddings and A Funeral) as Batiatus, Lucy Lawless (“Xena: Warrior Princess”) as Lucretia and Peter Mensah (300, The Incredible Hulk) as Oenomaus, will be additional cast members Dustin Clare (“Underbelly”) as Gannicus, Jaime Murray (“Hu$tle”) as Gaia and Marisa Ramirez (“General Hospital”) as Melitta. [source]

As with the original series, Gods of the Arena contains a lot of violence and skin and is not recommended for viewers below 18.