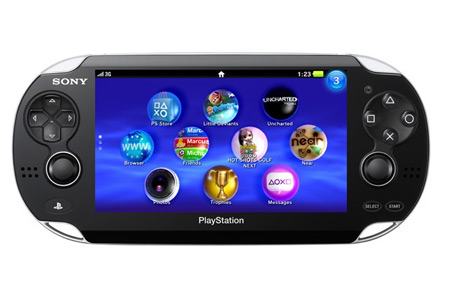 Sony has just announced their next generation portable and it is not (yet) being called the PSP2. It’s actually codenamed NGP and will revolve around five key concepts: Revolutionary User Interface, Social Connectivity, Location-based Entertainment, Converging Real and Virtual (augmented) Reality. The Sony PSP2 aka NGP will be compatible with the PlayStation Suite and is backwards-compatible with downloadable PSP games and content from Sony’s PlayStation Store.

Specs of the Sony NGP include a quad-core ARM Cortex-A9 processor, 5-inch touchscreen OLED display with 960 x 544 resolution, dual analog sticks (not nubs as on the current generation), 3G, WiFi, GPS, a rear-mounted touchpad, the same accelerometer / gyroscope motion sensing as in the PlayStation Move, an electronic compass, and cameras on both the front and back. Games wont be in UMD Format anymore and will come in SD cards and downloadable format. The Sony PSP2 aka NGP will be available this holiday season in Japan so Pinoy PSP fans can expect a western version around summer next year. Lets just hope that it costs less than 300 US dollars of the NGP codename would mean “Not Gonna Purchase” for a lot of gamers.