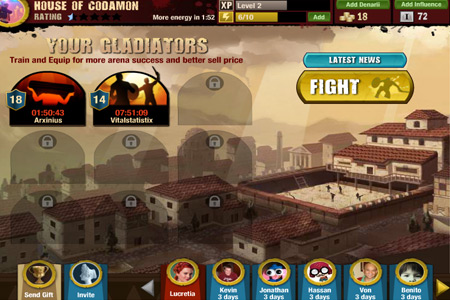 Spartacus: Gods of the Arena is a new Facebook game by 6 Waves and developer Large Animal Games. It is currently in closed beta as as such it does feel a bit lacking in polish and features but is actually fun to play especially if you are a fan of the Starz production of Spartacus.

In Spartacus: Gods of the Arena, Players are in charge of running their very own ludus, which is basically a place to house and train their gladiators. Unlike the fighting games before Spartacus, however, players are able to purchase a wide variety of gladiators for battle, training them in speed, brawn, and vitality. Players do not control their gladiator when in the Arena but by manipulating jeers and cheers, they can influence the outcome of a match, even saving a gladiator from death.

Hopefully, Spartacus: Gods of the Arena developer Large Animal Games improves on the features as well as enable a off/on option for the sound effects and music.

1 thought on “Spartacus: Gods of the Arena”