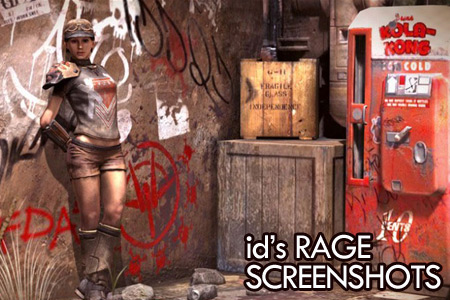 Rage is id Software’s next generation game boasting incredible graphics courtesy of the newest version of id’s graphics engine, id Tech 5. Rage is set in a post apocalyptic world where humans struggle for survival amid the threat of mutants and a lot of other nasties. If you played the Fallout series then you know what i am talking about except Rage looks a a lot more detailed graphically. Wouldn’t Rage look cool on the recently announced Sony NGP aka PSP2? Maybe id and Sony can let you download save data from your PS3 onto your portable Rage version where you play exclusive sidequests that you can bring back to your PS3 console. Now, that level of connectivity would be cool.

The Story of Rage

Within one year 80% of all life is gone. To make matters worse, Apophis contained large amounts of heavy elements. Darkness blankets the planet. The Earth falls into an impact winter lasting almost 50 years and life on the surface is driven to the brink. Prior to impact, in an effort to save human civilization, Arks are constructed and buried deep underground. These cryogenic lifeboats carry humanity’s future, preserved with the tools they need to rebuild. They are the seeds of Earth’s rebirth.

But when survivors begin to emerge from the Arks, they find the unexpected. Many humans who were above ground during the impact unexpectedly survived, while horrific mutants roam the dead cities. And a mysterious tyrannical government, bent on creating a new world order, has begun the search . . . for you.

One thing is bothering me about Rage though: Sure, it looks pretty and all but what kind of PC rig would you need to run it, assuming they have a PC version? Damn, console players are sure lucky when it comes to specs.