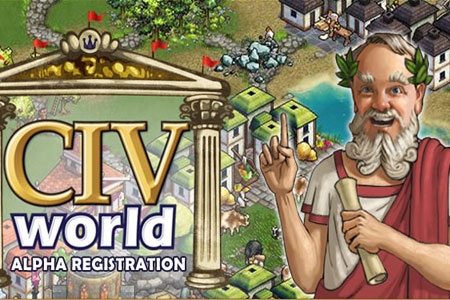 Sid Meier’s Civilization World, formerly CivNet/Civilization Network, has announced that a team based alpha test phase will begin January 12, 2011. Sign up for the Civ World alpha test by going here and logging in using your facebook account: www.2kgames.com/civworld/alpha.

Civilization World is the Facebook version of the best selling turn based strategy franchise, Civilization.

Hello Civilization fans!
We have some exciting news to share with you about Civilization for Facebook! As you can see from the new look of this page, the official title for our game is Civilization World (Civ World). Why a name change you say? The name better reflects the main theme of the game; in Civ World you will be joining your friends to form nations, which will compete with other player-nations to rule the world. Civ World’s shaping up to be a really fun Facebook game, as well as another addictive Civilization experience.

We’re also happy to announce that we intend to launch the Closed Alpha test version of the game on January 12th, and you can sign up to become part of our development testing team starting today! Would you like a chance to join the test? Then we’ll need you to form a team with your friends, and sign up for the alpha test as a team. Why a team? Because to win in Civ World, you’ll need to collaborate with your friends in order to do well in the game and become ruler of the world, so in our early Alpha testing, we’re grouping people together to simulate how the game will work when it’s available to the world at large. In the final game, you’ll be able to sign up individually (although we’ll love it if you invite your friends), but to participate in Closed Alpha, you’ll have to enter as a team. It’s up to you how you organize your testing team. Your team can be anywhere from 5-50 people.

What we’ll need from each team will be a team name and a team captain. Each team member will need to register on our sign-up page www.2kgames.com/civworld/alpha and enter their team name and captain’s name, along with some other information. Teams will receive their acceptance confirmations beginning January 10th. Teams are how we ensure you get to play in the same game as friends. However, Civ World is a game of shifting alliances and powers, with civilizations and factions rising and falling all the time. You may not always be playing on the same side as your teammates — in fact, you’re just as likely to be their opponents! We’ll ramp up the size of the Alpha test squad as we progress in development, so hang in there if your team is not part of the first round. We’re looking forward to bringing you into the game, so go out there and get your testing team together!

Also, as a token of our appreciation to all of you who register for the Civ World Alpha testing, we’re going to create a special item that you can proudly display in your throne room to let the world know you’re one of the founding players of the game.

And now, an update on the game design. I’m having a really fun time hands-on designing and programming Civ World along with our terrific team at Firaxis. In the coming months, we’ll be posting a series of gameplay updates here on the fan page detailing parts of the game. Today I’d like to talk a little bit about the organization of the game to tide you over until that time comes.

Civ World games will have a well-defined beginning and end, each ending with a triumphant civilization and one person recognized as that game’s most prestigious player. Along the way, as you progress through the different eras of time, you’ll have the chance to win era victories as well. We want players to have both a final goal to work towards, as well as short-term objectives to achieve as they play. The trophies you unlock with your triumphs will carry over from game to game, and you can show them off in your throne room.

So, there’s some insight into how each game will be organized. Stay tuned – we’ll be updating you with our progress as the Closed Alpha moves along, as well as updating the page as we select new waves of testers. Thank you for all of your support, and we hope you enjoy the game as much as we do!