IGN has posted a preview for one of the, if not THE, iPhone game to get for RPG and graphics lovers: Infinity Blade by Chair Entertainment. Why? It runs on the Unreal Engine (*gasp*) and plays like a charm plus its has a fantasy setting that would make RPGs on traditional game devices proud. For Apple iPhone, Ipod Touch, and iPad.

Most iPhone games with great visuals have control schemes best fitting a console, not a touch-screen device. Shooters, racers, and other games made more for a core audience try to find ways to fit standard game controls onto a touch screen, often with messy results. These “games for gamers” just don’t seem to get it—we want games that couldn’t be played on anything but a mobile device. Infinity Blade developer Chair Entertainment gets it. And the proof is in a game designed with the touch screen in mind. 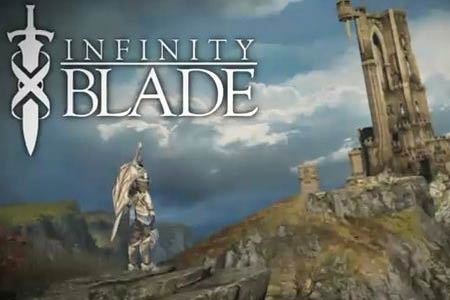 There are no virtual joysticks to be found in Infinity Blade. Combat is handled as if your finger is your weapon. There’s a lot to combat, actually, despite some very simple controls and no one really knows how it all works — until now.

Let’s start with basic attacks. Swipe your finger across the screen in any direction and it registers as an attack in that direction. Short swipes, long swipes, up, down, diagonal. Wherever you swipe on the screen, Infinity Blade recognizes your moves. A single sword stroke really won’t do much for you. Attacks are about combos, so you’ll want to rapidly swipe in different directions, which creates a flurry of blows.

Sounds easy, but it’s only that way your first time through Infinity Blade (20-30 minutes). Infinity Blade has you repeatedly attempting to defeat the God King. Each time you die at his hands, your son returns to the God King’s castle two decades later to try again. With each successive bloodline, the enemies become tougher, stronger, smarter, and more aggressive.