In the Blade and Soul G-Star 2010 premiere Q&A with the the game’s Producer Bae Jae-Hyun and Lead Designer Hwang Sung-Jin, Korean media asked a questions for Blade and Soul’s designers: How much grind will be in Blade and Soul?

In response, Bae Jae Hyun promises that Blade & Soul isn’t that kind of game that asks you to kill 10 monsters and then 15 another kind of monsters, instead, there will be lots of stories from the very beginning. Besides, he mentions that different servers and continents will enjoy different scenarios. Interesting, but will these differences be merely cosmetic where they change the name of the monster and/or the monster palette? 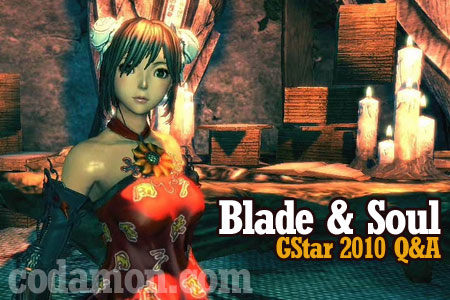 As an action MMO, having a no class restrictions seems to be a must for Blade & Soul. Although in a party there will be players who prefer to play as “tanks” or as “healers”, NCSoft wants to minimize the distinction. A so-called DPS character can also learn healing skills when reaching certain level and players can resurrect by themselves with the Chi Mediation system. One of the benefits of having a clear character skillset distinction was for each class play a certain role in parties, will the blurring of this line be a detriment to Blade and Soul’s Party and PVP system?

Another topic that was discussed was about a City Siege feature noting that many Korean MMOs do have a City Siege system, including NCsoft’s own Aion and Lineage. But, surprisingly, this game feature won’t appear in Blade & Soul because according to the developers, the game focuses on story, and they have enough stories for players that makes those events like City Siege become unnecessary. I’m betting five bucks this will come out in a future Blade and Soul patch… =)

Cloth and Armor design was another topic. Blade ans Soul has a sexy appearance and the developers really don’t want the characters to wear heavy armors. Thus, the developers hope clothes in Blade & Soul aren’t items that can increase your health or defense or other attributions but the symbols of honor and reputation. Amen…