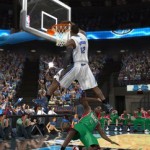 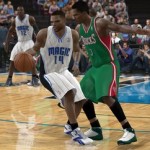 Gamespot writes: “Along with the name change will come a new approach to basketball, one that is being led by a name familiar to fans of EA Sports’ hockey series: David Littman, who is now spearheading both NHL 11 and NBA Elite 11. We recently caught up with Littman to talk about his new role overseeing both games and to learn more about the new approach for EA’s upcoming basketball reboot.”

GameSpot: How did you come to be on the NBA Elite 11 project?

David Littman: NHL and NBA have been working together for a while since a lot of features are similar such as Dynasty mode, Season mode, and Online Team Play. But we wanted to take it one step further. NHL has been incredibly successful over the last few years, and the NBA franchise could greatly benefit from the learnings we have had on NHL. I had a vision and design for what I thought the NBA game could be both on and off the court and brought that vision to a few other people at EA. We got a prototype up and running, and it really caught on internally.

Even more important than that, the studio is putting a lot of people, resources, and new technology behind the game. With the studio success of FIFA, NHL, and Fight Night, it is time for basketball to shine. We have a technology called ANT (Animation Tool Kit) that is miles ahead of any external technology. One of the geniuses behind the technology is a software engineer named Geoff Harrower. Last year, Geoff was named EAC Studio MVP for his groundbreaking contributions to multiple franchises, including FIFA. [You’ll be] hearing from Geoff this year as he takes the technology that has been a driving force for a number of other EA Sports award-winning titles and applies it uniquely to the world of basketball video games in NBA Elite 11.

GS: You are highly regarded as a hockey developer, thanks to your work on EA’s NHL series. Was there any hesitation in coming to an NBA game?

DL: Not at all. I actually started my career as a tester on Madden when I was living in Orlando. I love all sports games. My pro hockey career certainly helped me move on to the NHL franchise, but I am a gamer first and foremost. I have owned almost every gaming system since my Atari 2600 and have played as many games as I can, including first-person shooters, RPGs, MMOs, and, of course, sports games.

My new role is creative director for both franchises–hockey and basketball–so I still work closely with the NHL team. But it has been a joy and an honor to work with the basketball team. The NBA Elite team has guys from FIFA, NHL, Fight Night, as well as the guys that made NBA Live 10 the highest-rated NBA Live game of this generation. I have brought with me my knowledge of video games, my knowledge of pro sports, and my learning of what made EA Sports’ NHL a success. But I am just one piece of the puzzle. There are many other people who you will hear from over the next few months that will make this game a success. This game is not about any individual person. It is about making a realistic basketball game for people who love great Sports games.

GS: Are you a basketball fan? Did being in this position require you to ramp up your knowledge of the sport?

DL: My background is hockey and video games. I do not pretend to be a basketball expert. We have basketball experts on the team. An example of this is Novell Thomas. He is one of our gameplay producers and backed up Steve Nash on the Canadian National team. Everything we put in the game must go through him for the sake of authenticity and realism. Even Novell was skeptical of the new systems. That is until he was able to play it. Novell will be the first guy to tell you (which he will, over the next few months) that this is the most realistic-feeling basketball game he has ever played. Pretty much everyone who has played it has agreed.

read the full QA via Gamespot