Kingdoms of Camelot is a role playing facebook game where you build your kingdom, raise an army and conquer the medieval world! To start your journey, it will give you the opportunity by awarding a new city chest, and 10 gems. Your City is in the center, and around you are Wildernesses to conquer, other Cities to ally with or Attack, and Barbarian Camps to be plundered and driven from our lands 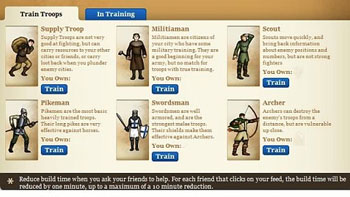 Looking for Cheats for Kingdoms of Camelot ?

Using Knights to Supercharge your game
This Kingdoms of Camelot guide will discuss the most effective ways to use your Knights to supercharge your game. Too many people ignore their Knights (or at least downplay their effectiveness). With the new, fourth city deeds, the role of the Knight has never been more important. Hopefully, players are growing their Knights now for the future expansions into the fifth, sixth, etc cities.

Make sure you fully understand their power and capitalize on their benefits.

Build a Third City
Finally! On March 30th, 2010, the Kingdoms of Camelot developer implemented the much anticipated update that allows players to build a third city.

1. Preparation – Gather Crests
The first thing you need to do is to earn the crests required. You must turn in:

Be prepared to conquer a LOT of wildernesses. On average, you will earn a crest about 3-5% of the time. There does not appear to be any differences in the drop rates or the type of crest on anything from a level 5 to a level 10 wilderness.

Your other option is to buy the Squire’s Chest in the shop. . . but that requires you to buy gems with real money.

The deed will show up under My items and on the Court tab. Read the full article on how to build the third city here

Maximize your Might
Might is the measure of the game. If you are able to earn 2,000,000 might, you will reach level 60, which is the current cap in the game. The problem is how to reach that cap efficiently. Read my other posts on issues relating to food management.

Knowing that food is the most difficult factor to manage later in the game, there are a few statistics you may look at in determining how best to achieve increased might. More here

1 thought on “Kingdoms of Camelot cheats guides and tips”