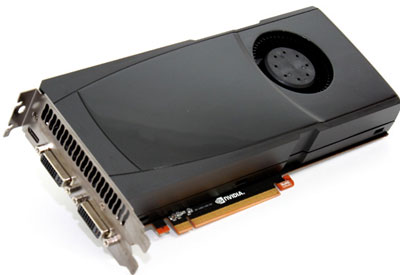 GeForce GTX 465 reviews after the jump.

As for the specific GeForce GTX 465 we have tested today, the graphics card from Zotac is a copy of the reference sample, differing from it with the stickers only. The product comes in robust and pretty-looking packaging and has all the accessories necessary for using it. However, our sample was prone to overheat and, consequently, was very noisy. We don’t know if all other versions of GeForce GTX 465 behave like that, too. Anyway, if you want to buy a GeForce GTX 465 for some reason, the Zotac card will be a good choice. via xbitlabs

In terms of noise, power and heat not much has changed compared to the GTX 470, NVIDIA’s latest card simply behaves like a less power hungry GTX 470, proportionally to the performance it delivers.
When looking at pure price/performance, without the requirement of DirectX 11, the AMD HD 4890 and the GeForce GTX 275 seem to be the best deal right now. But if you must have DirectX 11, then the GTX 465 becomes a valid choice. Personally I find NVIDIA’s price point of $279 a bit high, something like $249 or $229 would have been more appealing to many users who are torn between ATI and NVIDIA now. On the other hand I am sure that ATI has so much margins on the HD 5830 that a price war would be bad for both companies. via techpowerup