Seikon no Qwaser was originally a manga series written by Hiroyuki Yoshino and features art by Kenetsu Sato. The manga is serialized in the shonen manga magazine Monthly Champion Red and will be made available in North America by Tokyopop.

Codamon.com Advisory: Seikon no Qwaser contains extreme violence and quite a bit sexual overtones, Not recommended for the kids. 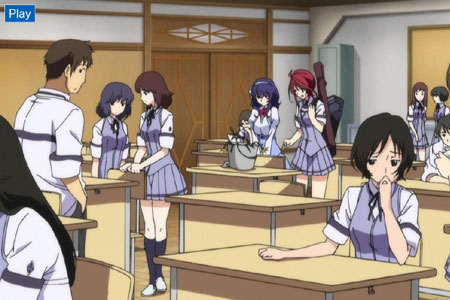 Seikon no Qwazer is a 13 episode anime series that takes place on the grounds of St. Mihailov Academy, a Japanese Eastern Orthodox school, and is heavily influenced by religious references from the aforementioned religion. Here it follows the trials and hardship of two of its students, Oribe Mafuyu and Tomo Yamanobe, until the encounter with a mysterious, silver-haired, Russian boy named Alexander, or Sasha for short. This puts them and the whole school in an all-out war between the Church itself and the so-called “Adepts”, a sect of individuals wielding powers linked to the elements of chemistry. Though based on the common magical girl concept shown in series such as Sailor Moon, the story diverges in depicting extreme acts of bloodshed, brutality and perversion, and also makes heavy use of fanservice.

Thoughts and Recommendations
Fans of the manga will be let down with the censoring of scenes involving the extraction of soma although the art looks better than ever and is quite lovely in movement. The first episode roughly mirrors the first manga series with some minot scene changes and the aforementioned censorship. I cant recommend this to everyone as it has material that will turn off a lot of viewers and the plot is convoluted and niche for a mainstream audience. Bottomline, the animation and character art are awesome but i’m not so sure about the execution of the plot.