BOOMSHAKALAKA! NBA Jam, Midway’s zany and enjoyable arcade basketball game is back, but unfortunately only for the Nintendo Wii. Here are some of the features reported to be on the this current gen version of NBA Jam being developed by EA Sports: 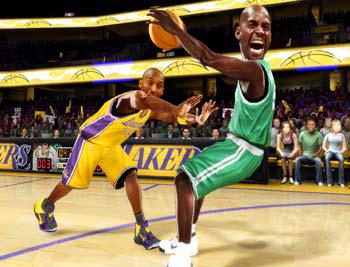 One of the cool things about this version of NBA JAM is the player graphics which look like 3D models but with funny 2D heads. EA has hired the original developer of NBA JAM but i gotta say that this is one game that needs a robust ONLINE multiplayer capability.

2 Modes, 1 is called Classic Campaign, plays pretty much identical to previous NBA Jams, 3v3, no rules other than shot clock and goaltending. The other is called Remix Tour, which is different, changing the core mechanics, rule tweaks, and camera tweaks etc. The devs didnt want to go into detail on the Remix Tour mode yet.

Theres tons of new dunks, a new spin move that can evade the shove move.

The faces are actual photograph captures, each character has multiple faces, 3 faces while running the court, 2 dunk faces, and a positive and negative face. (Looks hilarious. Basically its 3d bodies with 2d heads)

Option of motion controls or holding the wiimote sideways. Didnt see any mention of the Classic Controller