No one could have predicted the critical and commercial success of Borderlands, one of the last year’s left-field surprises. Bordelands Developer Gearbox Software’s decision to completely revamp the look of Borderlands has ignited interest in the coop shooter with the promise of a billion different guns and when the game was released in October, it only took a look at your friends list to realize it was a hit. 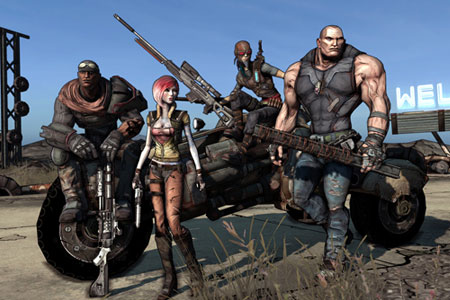 To get a better sense of how Borderlands took shape at Gearbox, how the team decided to play with the art and what that means for the future of Borderlands, G4TV spoke with Gearbox VP of product development Aaron Thibault, producer Stephen Palmer and game director Matthew Armstrong.

G4: When I went over Twitter and asked users for questions, people wanted to know if you were on Team Conan or Team Leno? We should get the awkward question out of the way first.

[laughs from around the room]

Stephen Palmer: I was impressed with him sticking it to the man.

Thibault: I’m pretty sure we have a Craigslist bid out. [laughs]

Armstrong: This came about actually [when] we were finishing up Halo. We were porting Halo to the PC, which was quite fun and it was really neat and it was really enjoyable to get to play around in Bungie’s work and see how they did things. One of the things that they did, which is genius, is their weapons used a sort of data-driven system. Rather than building each weapon individually, they built the weapon systemically, which is a little different than how most games did up until that point. We looked at this and I thought a little beyond that surface area of how they did it to make it more convenient, let the designer have more control over the weapons, and I realized that if you did this right and you evolved it the right way, you could have a first-person-shooter that had literally millions of weapons all designed or built with a fairly small group of people using systemic design.

I go to one of our producers at the time and mention this and I say “I don’t know what we do with this exactly” and his response is “well, you do Halo-meets-Diablo. You make that promise. That’s sort of a promise that floats around the back of people’s head.” When he said that, we started thinking about how could we do this, how could we make a first person shooter that has the accessibility — when I say Halo, I don’t mean literally Halo. Halo brings to it a measure of accessibility and ease of use and anybody can play it. When you look at a role-playing-game you see something that’s deep and more complicated and more tricky. What Diablo did was Diablo took the role-playing-game and made it accessible. Randy [Pitchford, president of Gearbox] often says that the skill used in playing the game is the same as opening an application — it’s mostly clicking, it starts very simple, it evolves and you learn.

We could apply a lot of these same concepts to a first-person-shooter and anybody that plays Halo can jump into and understand but can evolve into something with the depth and fun and variety of a kind of a nice fun action RPG. So, that was the start and that was the goal.

G4: Clearly the art style is something that’s come up. A lot of people have said they were very interested in Borderlands but the tipping point for a lot of people where they, I don’t know, identified the soul of Borderlands, was when that art change happened last year. At what point in the project did you guys identify this was something to work on?

Armstrong: I just want to say that for a lot of people at this company, that was also the tipping point for what this project was. The art style change really brought into focus what the game was. The art style finally meshed with the game’s personality and the gameplay style and that really, really made it easier to develop and to work on it.

Palmer: As far as a specific timeline, that change didn’t happen till very late [in] 2008. In fact, October. That marked a pretty major change in the entire project. Like Matthew said, I think that was a big catalyst for finally zeroing in on the personality of the game and making the game fun.