Imagine that you can play your favorite Xbox Live games on your phone…You might think that Microsoft is taking a page out of Apple’s/Nokia’s playbook and you might be right if a recently uncovered job ad means what we think it means: 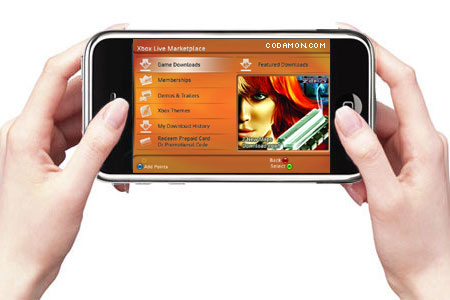 Newsfactor.com reports that Based on recent job postings on Microsoft’s site, it appears that Redmond is making moves to bring Xbox Live to Windows Mobile devices. The competitive differentiating capability may be available when Windows Mobile 7 debuts in late 2010. Microsoft posted the listing on its Connected Entertainment job site on Dec. 23. The job title is Principal Program Manager — LIVE Entertainment for the Xbox Live product. The post outlined how Microsoft is connecting players via the Live services on new devices beyond the console.

“We need a Principle Program Manager who can help drive the platform and bring Xbox LIVE enabled games to Windows Mobile,” the post said. “This person will focus specifically on what makes gaming experiences ‘LIVE Enabled’ through aspects such as avatar integration, social interactions, and multi-screen experiences.”

The Mobile-Gaming Landscape
Could Microsoft be setting out to compete with Nokia and Apple on the mobile-gaming front? Microsoft would have some catching up to do, but with the popularity of Xbox Live, the software giant could make strides quickly.

Games continue to dominate Apple’s App Store — there are currently nearly 950 games available. Apple has sold more than 30 million iPhones and iPod touch units, keeping pace with Nintendo’s Wii video-game console. The iPhone opened up a new world of gaming potential for mobile devices that some call the smartphone games 2.0 market. The iPhone accounts for 10 percent of the U.S. mobile-gaming market, according to media research firm Screen Digest.

For Nokia’s part, the N-Gage is a made-for-mobile games service available in compatible Nokia Nseries and other S60 3rd Edition devices from Nokia. N-Gage aims to make it easy to find, try, buy, play and manage high-quality mobile games as well as connect to friends and other players in the N-Gage Arena, Nokia’s mobile-gaming community. But Nokia is not making the same headway as Apple.

Microsoft’s Mobile Opportunity
Market researcher DFC Intelligence predicts the global market for mobile and portable games will reach $11.7 billion by 2014 — and Apple will get most of the pie. Games sold for the iPhone and iPod touch could grab as much as 24 percent of the portable game software sales, DFC reports. That could change, though, if Microsoft gets into the game with its Xbox Live services.

Michael Gartenberg, a vice president at Interpret, is glad to see Microsoft take its vision for three screens connected to the cloud to the next level. If Microsoft gets the Xbox Live integration into Windows Mobile 7 right, he said, it could be a huge differentiator for the company and help it compete against Apple.

“Apple doesn’t have a game console, and mobile gaming is an area that Microsoft doesn’t play in — at least not yet,” Gartenberg said. “This move would give Microsoft an opportunity to differentiate the value experience. If you are an Xbox owner, maybe that gives you more of an incentive to go with a Windows Mobile phone instead of something else.”