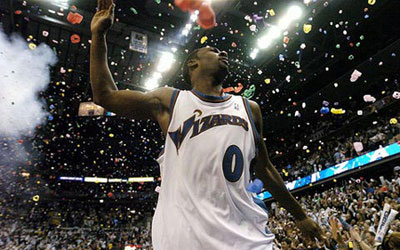 You know him as Agent Zero, Hibachi or maybe even as Gilbert Arenas from the Washington Wizards in the NBA. And yes, he has this fresh, honest, entertaining blog over at NBA.com. As some of you know, he was here a couple of days ago for his Adidas promotion and ,based on his latest blog post, has much love for Manila and the people. Props to Hibachi for giving local tourism a big PR boost. Maybe he would want to suit up in the PBA when his NBA days are over =) :

Manila
Then we stopped in Manila. It was a different world. I’ve never seen fans like that in my life. These pictures can’t even do justice to what was going on out there. I had a reception at a small, little venue to welcome me to the city and there were 200 people there.

One thing I want to say about Filipinos: they’re very warm people, very good-hearted people. Like, everybody was nice. You know, you meet nice people, but a whole country of nice, genuine, warm-hearted people was unbelievable. These are diehard fans.

I really didn’t know if I was in Game 7 of a playoff series, I couldn’t tell the difference. Everywhere I went it was just bananas.

I also want to give a shout out to my man from Maryland who flew from MD to the Philippines and told me the reason he flew all the way out there was to get autographs from me because he knew I was going to be there at that date and time.

I did a couple mall tours. I also helped a kid with his wish. It was in one of the poverty areas in Manila and there’s a group called GK that builds homes for people all over the world. They helped this community out by putting people in homes. I guess a couple weeks before we got there, a hurricane hit and destroyed their community and GK helped build it back up.

You have to look at the Agent Zero posters they had out there. They put me in a cape at one of my last events in Manila. It was at one of their biggest malls and they were predicting it was going to be crowded. I mean, crowded to me is a Saturday afternoon at the mall where you have to wait in line for 10 minutes to pay for your jeans. Their crowded was probably four or five thousand people in the mall. It was like nothing I’ve ever seen before, and I’ve seen crazy fans all over the world. It was like Golden State against the Dallas Mavericks with Game 3 back in Oakland. It was that type of atmosphere in the mall.

I felt like I just won the NBA championship, to be for real.

After we left the mall we were looking at pictures from the event a couple days later and we were telling ourselves, “Man, that was unreal!”

Backstage I met Manny Pacquiao, he’s the town hero. I have to be honest, they made me feel even bigger than him at the moment. I talked to him and he invited me to his November fight, so if I have time and depending on if we have a day off, I might go see that. Oh, I also met Jet Li in Shanghai, can’t leave him out.

On top of everything else in Manila, I stayed at the best hotel I’ve ever stayed at – The Peninsula. I was in the mack daddy “El Presidente” suite and was like the Fresh Prince with Geoffrey – I had a live-in butler.

One more note on Manila, just so you guys can get a picture of what kind of people they are and how much they adore and love entertainers and the NBA. Think about this: If you’ve ever been to a Beyoncé concert, or anybody’s concert in the states really, if they sell out an arena it will be 20,000 fans. Last year in Beyoncé’s hometown, Houston, she pulled in 12,000 people to her show. D.C. was her biggest sell, she put 18,000 people in the seats. Meanwhile, she was in Manila for two days to do two concerts and she had 85,000 people, two nights straight.

She couldn’t even do it in the arena, she had to do it on the lawn. Like, “Everybody, y’all just get in the grass, I’m going to perform.”

That’s how the people are out there.