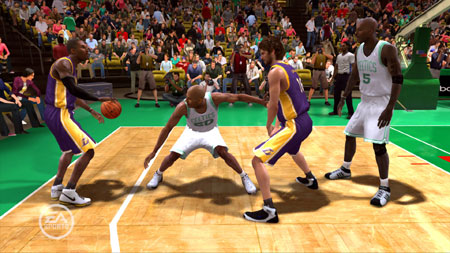 Oh, EA. It’s not about the new features you add but it’s about fixing that old, repetitive, nonsensical NBA Live gameplay that has plagued the series for years. Dynamic DNA is nice and all but….make a better game, please? Buying Take Two wont solve your Live problems if you just buy off the NBA 2k team.

Aspects of this system also include Team DNA, which rates how each player on a team works with every other player, and a system called Tendencies that judges what types of plays NBA players tend to use. All of these aspects will be updated frequently based on recent NBA events.

According to EA, this constantly updating NBA LIVE 365 system will also be used for a feature called NBA Rewind, which will let gamers replay recent NBA games using conditionals identical to that game, including injuries.