Check out one of the latest anime from Gonzo, Blassreiter: 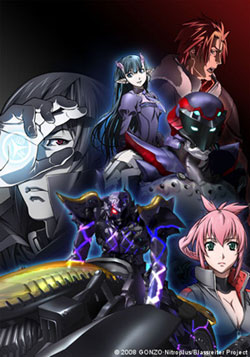 Faced with an outbreak of demonic blood, which transforms humans into insane and hideous creatures bent on violence and death, only one man can stand against the tide of destruction. Joseph Jobson, the only man able to control his cursed demonic form, must hunt down the man who cursed him and save the world from apocalypse. With stunning visuals, epic battles and a dark, mature storyline, BLASSREITER sets the standard for the next generation of animation.

As the dark cloud of apocalypse shadows over the world, stigmatized heroes arise….for reasons yet unknown…

The story takes place in a city in Germany sometime in the near future.
A puzzling incident occurs where a corpse rises up in the form of a strange creature and attacks people.
The appearance of the monstrous undead shakes the nation as horrified people look on the incident as a sign of “the coming of demons.”

The city also witnesses the rise of beings with special abilities that can incarnate into demons at will. Each and every bearer of this special ability, while being condemned as demons, uses his/her power for different ends…

Some use the power for what they believe as justice.
Some lose themselves in the immensity of their powers and abuse them.
Some use their power to realize their ambitions.
Some use it for the purpose of revenge.

However, all are eventually burdened with the same overpowering fate: to fight in a Battle Royale in which the lives of all “demons” are ultimately jeopardized…

Each uses their powers to survive, and to fulfill their individual purposes.
However, using the special power comes with a price: their human minds gradually begin to debilitate…

An unrelenting and devastating story of young men and women racked with solitude and agony.