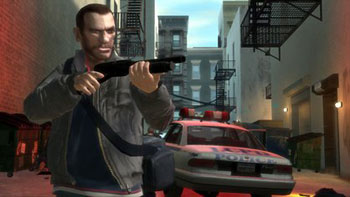 Well, not by me but by the deputy editor in chief of Xbox World: Rob Taylor. Based on his interview with Games Radar, It looks like GTA 4 will be again a masterpiece and will raise the bar of quality in gaming once again, lawsuits and all .

Interview with Rob Taylor by Games Radar
How different is the game from the others?
It’s certainly tighter, both in terms of the way Liberty city is structured and the way in which the narrative feels more movie-like than before. Otherwise, everything feels as if it’s been given the next-gen treatment; in particular the driving and shooting are light years ahead of past GTAs. Overall, it’s a stratospheric leap forward, beyond anything I’d imagined.

Was the game everything you expected? Or are there some surprises?
That’s a tricky question. It certainly exceeded my expectations, while there are so many small, chucklesome Easter Egg-style surprises that you’re constantly shaking your head at just how savvy a developer Rockstar really is â€“ light years ahead of its contemporaries. Again though, it’s hard to be specific without venturing into thIn terms of the time it takes to finish, how does it compare with others in the series?

That’s a hard question to answer really. I finished the story mode in 24 hours, without skipping cut scenes, but I literally blitzed through and hardly took on any side missions. If I was to play it again (which I will be, right on launch day!) I’d say to wrap up the story will take at least 40 hours at a normal pace, plus another â€“ say, 25? â€“ to wrap up the remainder of the missions. In truth though, you could be paving the streets of Liberty City in a year’s time and still not have discovered everything. Plus, if you’re a 360 owner, there’s the promise of downloadable content to come…My advice is: just kick back, take your time and breathe every fresh sight and sound in, don’t simply rush through just to finish it before your mates. I wish I’d had that option!

How many “Woooaah, Jesus that’s amazing!” moments did you have?
Without giving away any spoilers; lots! I think, overall though, it’ll be three overall things that entrance GTA fans like never before. The City is one, with a lighting engine that has to be seen to be believed, plus the incredible dialogue and characterisation is genuinely Oscar-worthy and Niko Bellic is absolutely the most amazing protagonist in any game I’ve ever played. Finally, multiplayer of course!

Are the GTA fans going to happy with the new game, do you think?
Obviously, you can’t make everyone happy all of the time but if any GTA fans aren’t happy with IV, they need to take a good long look at themselves. Seriously though, this game is going to make a lot of people very happy.e spoiler region… sorry!

If you had to pick a favourite out of all the games in the series now which one would it be?
GTA IV. By a country mile. It craps on all the others â€“ even the mighty Vice City â€“ from a height equivalent to the Statue of Happiness. Believe me, GTA IV is even better than the hype suggests!