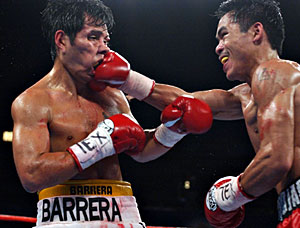 Pacquiao-Barrera II is on! Top Rank and Golden Boy Promotions, bitter boxing promotional rivals whose ongoing feud was holding boxing fans hostage because they refused to match their fighters, reached a peace accord Friday after two weeks of court-ordered mediation.

The settlement, reached Wednesday and signed Friday, was jointly announced by both companies Friday. As a result, several lawsuits between the firms, including the one at the center of the dispute: ownership of the promotional rights to filipino junior lightweight star Manny Pacquiao, are now canceled. Definitely, Great news for Boxing Fans and Manny Pacquiao.

Neither side would discuss specific terms of the deal because of a confidentiality agreement.

“I’m absolutely relieved this is behind us and that we will work together to make some great fights,” Top Rank promoter Bob Arum told ESPN.com. “I think it’s tremendous for boxing.”

Richard Schaefer, CEO of Oscar De La Hoya’s Golden Boy, echoed Arum’s sentiments, telling ESPN.com, “We are very pleased that we were able to do this. Boxing is the big winner. It’s an important day for boxing when you have two of the biggest promotional companies settling their differences and moving on to do things together. We can bring fans great fights. Top Rank and Golden Boy working together is great news for the sport.”

Their first fight together under the settlement is a big one. In announcing the settlement, they also announced that Pacquiao would meet Golden Boy’s Marco Antonio Barrera in a rematch on Oct. 6 at Mandalay Bay in Las Vegas. Pacquiao knocked out Barrera in 2003 to launch himself to stardom in the United States.

Under terms of the settlement, bouts between Pacquiao and Golden Boy fighters will be co-promoted by the companies. If Pacquiao fights an opponent outside of Golden Boy’s stable, Top Rank will promote the fight with Golden Boy being paid on the event.