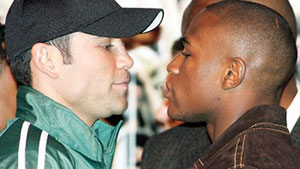 Oscar De La Hoya vs Floyd Mayweather in “The World awaits” Round by Round recap coverage.

Mayweather retiring after this Fight? Ugh seems like someone is afraid to lose. Notice the cheers after the fight? Those weren’t for Mayweather. Go figure. Oscar De La Hoya said it better ” If i didnt push him to a fight, there wouldnt be a fight”. Yeah, just some dancing around the ring with pretty boy Mayweather.

Here’s the round by round recap of the fight between 34 year old Oscar De la Hoya, arguably the sports biggest and most recognizable star in the past decade, and the 30 year old unbeaten Floyd Mayweather, who is recognized by The Ring Magazine as the best pound for pound boxer in the world.

Update: Rey â€œBoom Boomâ€ Bautista and AJ Banal both win their respective fights via unanimous decision. Rocky Juarez wins a unanimous decision over Jose Hernandez on the cards. Spectators say the Juarez-Hernandez fight was so boring that an interview with Floyd Mayweather Sr. was being shown instead of the announcer’s play by play of the fight.

De La Hoya-Mayweather Round 2: Floyd does his usual jabbing style. Some hits by Dela Hoya.

De La Hoya-Mayweather Round 3: Things getting hot as DLH getting some shots in and FM dancing around.

De La Hoya-Mayweather Round 4: DLh getting more aggressive with some good body shots to FM. some good exchanges. FM trying to ward off DLH usig a stiff left arm. good finish by DLH

Oscar keeps trying to rush Mayweather. De La Hoya going nuts with the body attack when he pins Mayweather against the ropes. Floyd back with the jab and now begins to land his left. Combo by Oscar at the bell

De La Hoya-Mayweather Round 5: Brutal exchange with DLH getting left to the face. Seems like the getting to know you stage is over with both roughing it up inside

De La Hoya-Mayweather Round 6: DLh trying his jab. FM getting aggressive. Good flurry by DLH. FM using his hand speed . Good right to the face by DLH. Flurry by both at the end.

Floyd jabbing. Floyd with a right. Oscar with a jab and a combo, Floyd comes back with a combo of his own. Floyd jabbing and lands a combo. Hard right by Floyd. Big combo by Floyd. Oscar chant begins. Left by Floyd. They trade some shots at the end

Floyd jabbing. Big right by Floyd. Floyd beginning to tee off with punches. Oscar tries to throw all of his punches as he traps Floyd, but he cant land any of the punches clean. Floyd landing two rights. Combo by Floyd. Floyd with a left

Combo by Floyd as Oscar rushes in. Floyd combos and lands a hard right. Oscar goes to the body. Floyd to the head and body. The two begin to trade in the final minute but Mayweather is landing the crisper and cleaner shots. They begin to trade plenty of power shots for the final ten seconds and Oscar now getting the better of the exchange

More insights, analysis on De La Hoya and Mayweather’s fight after the jump.

If you’re a betting man, id say Mayweather would be the most “safe” choice. But personally, id like to see De La Hoya win. Floyd may be faster than De La Hoya but he also is more arrogant to the point of being disrespectful of his more storied opponent. Oh dont forget that the last 2 opponents who tried to trashtalk the Golden boy: Ricardo Mayorga and Fernando Vargas, both got decked via TKO.

By Marc Abrams and Gary Herman, Ringside via 15rounds.com

In a close decision, undefeated prospect Bill Dib won a unanimous decision over Jose Gonzalez. Dib raises his record to 16-0 (10 Kos) while Gonzalez falls to 14-4 (6 Kos). The judges scored the fight 78-74 and 77-75 two times. Dib suffered a bloody nose during the fight.

John Murray beat Lorenzo Bethea by TKO when Betheaâ€™s trainer through in the towel at the 28-second mark of the seventh round. Murray lifts his record to 21-0 (11 Kos), and Betheaâ€™s drops to 6-5 (1 Ko).

Also on the card, Carlos Duarte defeated Calvin Rooks at 1:54 of round two by TKO. Duarte overwhelmed the debuting Rooks en route to the stoppage. Duarte remains undefeated at 6-0 (5 Kos) while Rooks is now 0-1 (0 Kos).

Christian Solano defeated John Oâ€™Donnell by Ko with a vicious left hook in the second round. Solano improves to 20-11-4 (15 Kos) while Oâ€™Donnell suffered his first defeat and falls to 15-1 (5 Kos).