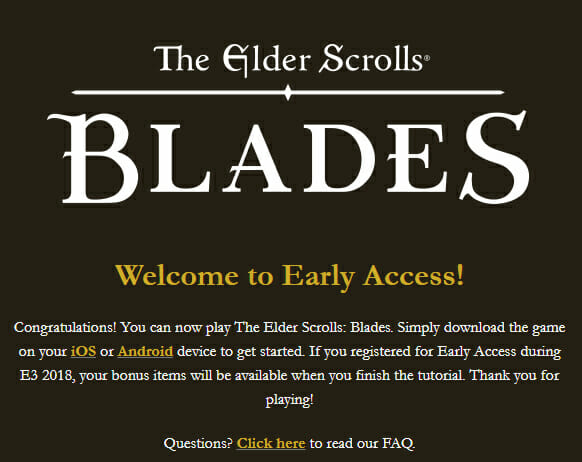 Bethesda just dropped an email giving me early access to the new Elder Scrolls Blades mobile game. Conveniently, they also released the game on both IOS and Android for gamers to download. For those not aware, The Elder Scrolls: Blades is a mobile version of the award winning RPG series from Bethesda – my personal favorites are Daggerfall, Arena and Oblivion – and i cant wait to get started playing.

From the get go- you will immediately notice that the gameplay is tailored for mobile with the touch based movement and combat. The first person view is very familiar to those who have played the previous games in the series and you simply click where you want to go, and you have freedom to look around. The game stops your movement if you encounter an opponent, battle thus begins which is a mixture of blocking by pressing the middle of the screen and attacking by pressing on your opponent and letting go. It feels ok, even if it took a little bit of getting used to. Spells are icon based, touch them and you start casting, get attacked while casting and the spell backfires.

Quests are also streamlined, just click on one and you get whisked off to that particular area. Once you have finished the area, just click complete quest and you are teleported back to your town. Fast and efficient.

The character creation screen is clean and simple, letting you choose from the standard races of the Elder Scrolls games. You can also customize you look, from hair to face paint as in previous games.

After the initial dungeon, the game starts by you starting to build your old town. This is what the previews were saying where it has a town builder element and not just raiding dungeons or crypts. You have quite a number of shops to choose from to put in your town and is a mini-game on its own. You open up other shops for your town as you level and get specific materials.

Graphics wise, the environment looks detailed and dense but the character models, especially their faces, are just meh. Reminds me of the older games, where face detail was not always been a strength. The environment graphics are also very sharp (no AA?), thus it becomes distracting especially outdoors with all that foliage moving. Forgive me but , Infinity Blade looks better even though it didn’t have all these pixels in the background and moving on the screen.

In my opinion – ultimately, while Blades may scratch that itch, a little, for more Elder Scrolls – it feels that some “thing” is lacking. The game isn’t as fun as i thought it would be. I was expecting a deeper more involved RPG or a better Infinity Blade, but right now Blades seems to be a slightly bland instance based mobile rpg/town builder hybrid. Not sure how much can change after Early access, but here’s hoping the game improves before it’s commercial launch.

You can check out the official The Elder Scrolls: Blades website and faq here: https://elderscrolls.bethesda.net/en/blades/faq

From Bethesda Game Studios, the award-winning creators of Skyrim, comes The Elder Scrolls: Blades – a classic dungeon crawler reimagined. The Blades, the Empire’s top agents, are forced into exile. On the run, you return to your hometown to find it destroyed. KEY FEATURES: QUEST and Experience stunning dungeon adventures. CREATE and customize your city, restoring it to greatness. CONQUER your friends and rivals in epic one-on-one Arena battles.* CREATE any character you want and discover unique weapons, armor, and abilities. MASTER the never-ending Abyss with a cutting-edge combat system. *NOTE: Arena modes will be added after the initial launch of The Elder Scrolls: Blade