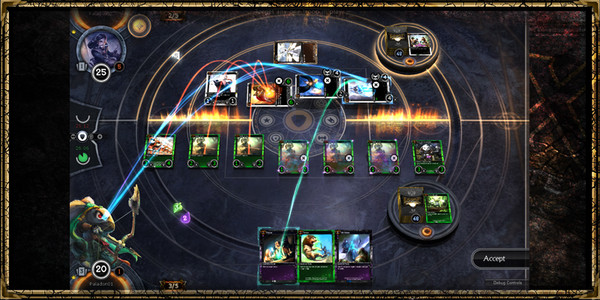 Hex: Shards of Fate was originally a kickstarter backed project by Cryptozoic Entertainment and is now the world’s Massively Multiplayer Online Trading Card Game (MMOTCG). Hex is scheduled to be published in the Philippines and Brazil by Level Up! / Playweb Games. 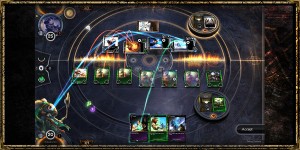 So why am i THIS excited? As some of you know i played competitive Magic: The Gathering (and L5r) for quite a number of years and even made the transition online via Magic Online. The problem i had as i got older was i didn’t have that same amount of time to spend going to tournaments or conventions. The competitive itch was still there and most of the time, i catch myself late at night wondering where to get my competitive fix, MTGO wasn’t as appealing since they removed leagues and haven’t updated the base client in 10 years or so. Plus the fact that you always run into the sharks and the swarms of sell/buy bots , just makes it stressful.

My Impressions: Client looks Elegant. Purely Digital. a bit simplified and less complicated than Magic (which may be a good or bad thing). We get to join at the start. Maybe some balance issues down the line. Excited about socketed cards but not sure how far they are gonna push the powers of these socketable gems. separate PVE and PVP cards sounds ok…, love the idea of raids and dungeons and the social layer is amped up as well. I wish the cards were a bit more different from Magic cards.

As i have told my friends at Level Up!, the biggest concern i have about Hex is if the local “walled garden” server will be enough to sustain its own economy. The local TCG scene is wide but there isn’t enough depth in terms of players. It is also interesting to see if our FPS and DOTA dominated local gaming scene will appreciate the elegance and subtlety of digital card games. There will always be kindred spirits locally for TCG and if you are one of them, join me at the FB Group PinoyHex here: https://www.facebook.com/groups/171695809693140/

Put simply: I don’t want to spend money on the local Hex server if my there is a big risk that the local scene wont pan out. I’d rather spend on the US server and be a bit more sure my investment (money and time) will last a bit longer.