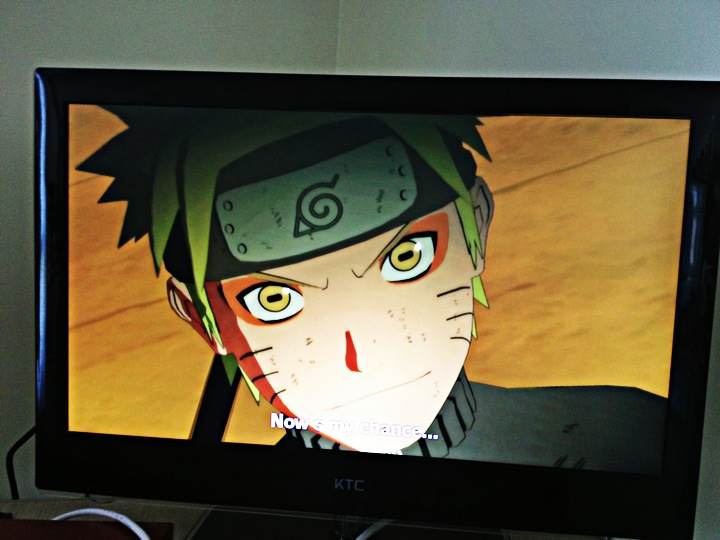 So i finally finished downloading the PS3 demo of Namco Bandai’s Naruto Shippuden: Ultimate Ninja Storm 3 and here are my impressions:

The Naruto UNS3 Shippuden PS3 demo starts with a 4 minute movie about how the Nine Tails came to attack Konoha and how the Fourth Hokage came to stop it despite being harassed by Tobi.

We then get to play as the Third Hokage defending the village of Konoha in a Boss battle with the Nine Tails. This section involves evading the Nine Tails’ attacks by moving from one building to another as well as making us of “attack points” on the map to damage the Nine Tails. You can also fill up an assist meter which when triggered calls upon fellow shinobi to dish out a damaging fire attack. The gameplay mechanic is simple but the onscreen animation is superb. Buildings get destroyed whenever the Nine Tails attacks, you see other ninjas jumping rooftops trying to help you damage the Nine Tails, and other famous Hidden Leaf personalities show of their trademark moves.

The best part in my opinion of the boss battles are the button press sequences which are triggered when other famous personalities join you in battle, pressing O triggers the button press event (or in some cases, joystick rotate event) and correctly doing the onscreen sequence of controls unleashes a powerful attack. Fail and you get damaged and you get to redo the event. It’s like watching an interactive movie as the animations are really really nice.

The next gameplay section involves the famous scene where The Fourth Hokage faces off against Tobi one on one in a glade just outside of town. Onscreen cues will tip you off to new awakenings and new moves that you can pull off in while in this mode. In The Fourth’s case, it’s his trademark Kunai teleportation + Rasengan from above combo. This is similar to your standard UNS battle gameplay with some minor teaks to Awakenings and UI. Beating Tobi signals the end of the demo. I’m eager to try out the other Jinchuuriki’s Awakenings based on the short clip at the end of the demo.

Unknowns
– we have no idea how the campaign is going to flow, and how fun it is to move around Konoha and surrounding villages again
– Did they nerf those pesky ranged characters (i’m looking at you, Deidra)

Bottomline, I’m excited about this third entry in the Naruto Shippuden series. I can’t wait for March 5!!!