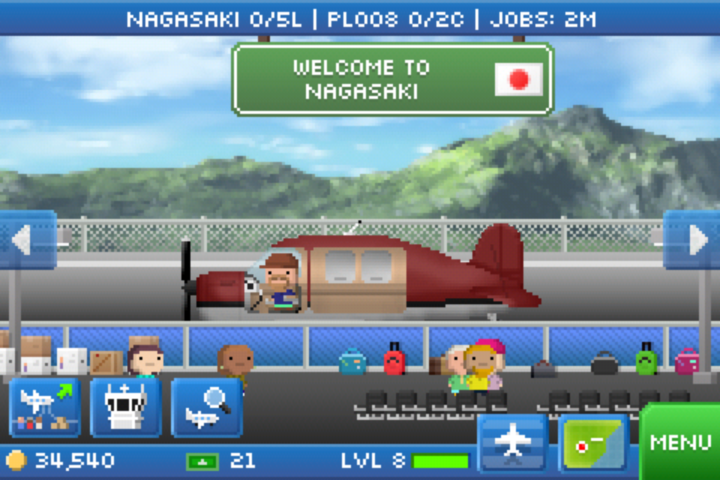 Nimblebit’s followup to hit mobile game Tiny Tower, Pocket Planes, is even more addictive if you can believe it. Pocket Planes has managed to be a fun free to play title that doesn’t force you to pay or hit the pay to play wall even multiple hours into the game.

What is it
Pocket Planes is an airplane management simulator. You start off with a few airports and a few planes, earning money by moving passengers and goods to and from these airports. Eventually, you will earn enough money to build airports in more cities and build bigger and more efficient planes which will lead you on your way to becoming an airline tycoon.

What i liked about it
I love the way how they made the game fun and lasting without forcing you to pay just to progress. I have been tempted multiple times to spend but i figured if i was going to spend it was for end game items. The retro pixel graphics style is something i adore, as you know i’m a fan of fellow developer Kairosoft’s games, and matches the theme of a mobile simulator well. I love the idea of world wide events as well even though each Pocket Planes player is playing independently (more or less). and it’s FREE!

What i think should be added
More customization options, More quest like activities also would be great, perk type bonuses that are in effect account wide would also be awesome. Custom pilots and planes have their own attributes that can be customized via in-game currency and/or IAP.

Final Word
Highly recommended if you like simulations on your mobile device. Nimblebit is one of those developers that actually know how to create a fun and engaging game so let’s support them.