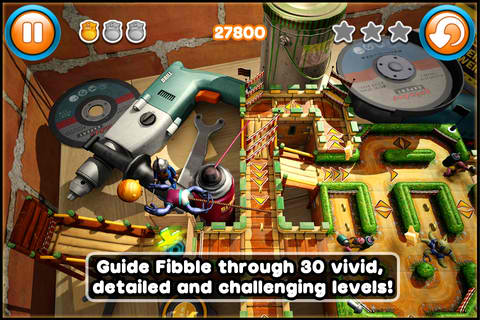 Crytek, developer of all thing Crysis, has released puzzle game Fibble on the Apple Appstore. This is interesting as one of the major players in PC/Console games as well as FPS has gone the app store route with a puzzle game no less. This s a testament to how strong mobile gaming is as to make one of the top game studios in the world try and adapt to the platform.

When the cute but curiously brave extraterrestrial explorer ‘Fibble’ and his friends crash-land in a regular suburban home, the world we take for granted suddenly starts to look a lot like alien territory.

HELP FIBBLE TO FIND HIS FRIENDS

In the dramatic crash, Fibble becomes separated from his crew as they’re scattered all over the mysterious house. Combine the unique skills of Fibble’s friends and discover all sorts of new possibilities: Overcome obstacles with some help from Byte, scale new heights with Ragno and inject some speed into proceedings with a boost from Vroom or Docto.

Use intuitive taps of the touch screen to flick, roll and control Fibble as he embarks on an adventure to reassemble his crew and blast back into space.

Discover the bright and colorful world of ‘Fibble – Flick ‘n’ Roll’ with its ambitious courses set in 4 distinct rooms ranging from the kitchen, to the bathroom, to the kid’s room and to the basement. Solve each Puzzle with a combination of logic, skill and reflexes.

Experience high-definition gaming like never before supported by top-notch features completely new to the mobile experience.

Enjoy a groundbreaking gameplay experience that is highly addictive and guarantees many hours of sheer fun.

BECOME THE ULTIMATE MASTER OF THE GAME

Along the way there are achievements to bag, objectives to complete and online scoreboards to climb—all of which will keep you coming back for more!