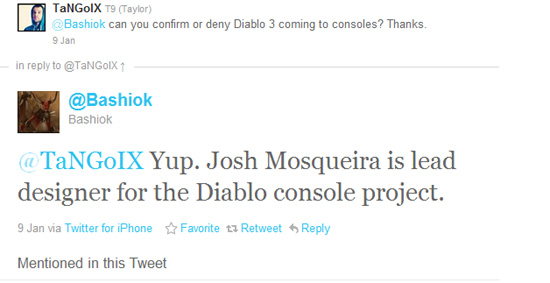 Diablo 3 is set for a console release according to Blizzard community manager Bashiok.  Asked whether he could “confirm or deny Diablo 3 [is] coming to consoles?” via Twitter the Blizzard CM replied: “Yup. Josh Mosqueira is lead designer for the Diablo console project.” 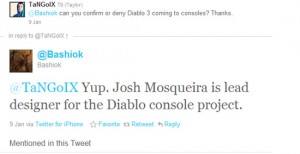 Blizzard has been more than open about the fact it’s exploring on how to make the latest Diablo entry work on consoles with a large number of vacancies posted relating to the PS3 and Xbox 360 development.

It’s no surprise that there’s a lead designer on the case, but Blizzard has always stressed that a console version of the game has not officially been announced. While it doesn’t constitute an official announcement, the confirmation appears to suggest that Diablo 3 will arrive on consoles in one form or another.