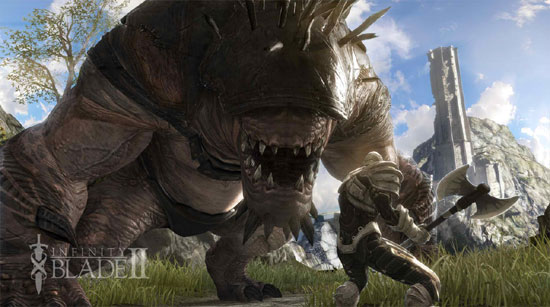 Infinity Blade 2, from series creators Chair Entertainment and Epic Games is coming to the Apple App Store in December and will be a platform exclusive. Thanks to Epic Games for the information.

Announced at Apple’s big iPhone 4S keynote today, the new Infinity Blade will run on Unreal Engine 3 and be made by Chair Entertainment. But this game, Epic and Chair, promise in a press release, will “build upon the addictive gameplay and breathtaking visuals of the original game” will include dozens of areas in an “evolving world.” Infinity Blade 2 will also incorporate more social features.

Apple iOS users who can run the new OS5 firmware will be able to sync their saves and profiles to multiple devices wirelessly through iCloud. No price was announced for Infinity Blade 2 but it will run on iPhones, iPads and iPod Touches, from 3GS and up. So, if your old iOS device can run the first Infinity Blade, chances are you can run the sequel.

Powered by Unreal Engine 3, the critically acclaimed “Infinity Blade” ushered in a new generation of handheld gaming and became the definitive blockbuster experience on iOS. “Infinity Blade 2” builds upon the addictive gameplay and breathtaking visuals of the original game with dozens of new locations set across expansive 3D environments. Delving further into the story of this mysterious, timeless adventure, players will explore an evolving game world filled with new types of rewards and treasures as they battle scores of new powerful enemies and bosses. New fighting styles and weapon classes coupled with deep role-playing elements provide even greater game play variation. “Infinity Blade 2” also introduces gamers to new online features, such as Clash Mob, in which they’ll participate with fellow gamers in unique “massively social” challenges to unlock rare weapons and exclusive items.

“‘Infinity Blade’ allowed us to demonstrate the true potential of triple-A handheld gaming by delivering mind-blowing graphics and awesome gameplay to millions of mobile users,” said Donald Mustard, creative director, ChAIR Entertainment. “With ‘Infinity Blade 2’, we’re pushing the boundaries of everything achieved to date and adding a ton of new content and unique new features to create the must-have gaming experience on iOS.”

Coinciding with the new game announcement, ChAIR today launched “Infinity Blade: Awakening,” a novella written by #1 New York Times bestselling fantasy author Brandon Sanderson (“The Way of Kings,” “Mistborn,” “The Wheel of Time”). The all-new literary adventure delves more deeply into the fantastical fiction of the “Infinity Blade” video games, to uncover a world of mystery and intrigue where magic and technology are indistinguishable, and even life and death are not what they seem. The “Infinity Blade: Awakening” novella is available now for $2.99 via the iBookstore®.

“An exciting aspect about media in this age is the chance to blend different types of storytelling,
blurring the lines between game, novel, and film,” said author Brandon Sanderson. “‘Infinity Blade’ is a great game with real narrative depth hiding beneath its shiny graphics, and I was grateful for the opportunity to express this in prose form and illuminate what had been previously hinted at in the game. I’ve really enjoyed working with ChAIR to produce something fresh and new that really adds to the experience of ‘Infinity Blade’ and hopefully changes the view of gaming fiction as a whole.”

Pricing for “Infinity Blade 2” will be confirmed at a later date. To receive regular updates on the game, fans cans register today at the official Infinity Blade 2 website: http://www.infinityblade2.com/.