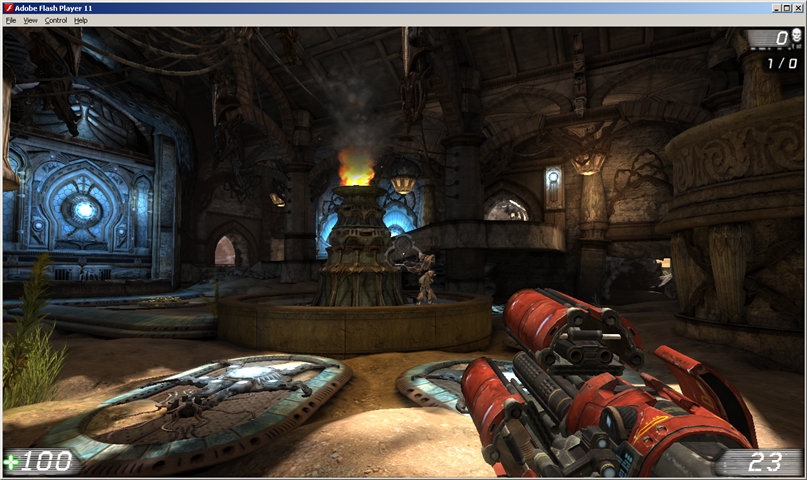 Imagine if you could run 3D accelerated games based on one of the world’s most advanced graphic engines on your browser? Imagine being able to port Unreal 3 games to the web? =) Imagine Facebook with console like 3D games, that’s what the Unreal Engine 3 and Adobe Flash 11 partnership can do.

Thanks to Dana Cowley, Senior PR Manager for Epic Games, Inc. for this news.

UE3 is constantly evolving, with new breakthroughs, technologies and optimizations for multiple platforms. Flash Player 11, with its hardware accelerated, programmable graphics pipeline, is now capable of running triple-A gaming content authored for high-end platforms using the industry’s latest tools and technologies.
Flash Player is a key technology for gaming on social networks and the Web, and with UE3 will usher in the leap from simplistic 2D game experiences to world-class 3D gaming on the Web. With its new hardware-accelerated Stage 3D APIs, Flash Player 11 allows 1,000 times faster 2D and 3D graphics rendering performance over Flash Player 10. Developers can now animate millions of objects with smooth 60 frames per second rendering and deliver console-quality games on Mac OS, Windows and connected televisions.

“With UE3 and Flash, games built for high-end consoles can now run on the Web or as Facebook apps, reaching an enormous user base,” said Sweeney. “This totally changes the playing field for game developers who want to widely deploy and monetize their games.”

“We’re excited that Epic Games is tapping into the latest capabilities in Adobe Flash Player 11 to power its Unreal Engine 3,” said Emmy Huang, group product manager, Adobe Gaming Solutions. “As the console of the web, Flash is delivering immersive gaming experiences across screens and we’re thrilled to have Epic Games using Flash Player to deliver its blockbuster, premier 3D games on the Web.”

UE3 licensees will be able to access these new features that bring triple-A gaming to the Web. For more information about developing games for the Flash Platform with UE3, visit www.unrealengine.com.

Epic Games, Inc., based in Cary, NC and established in 1991, develops cutting-edge games and cross-platform game engine technology. The company has created multiple million-selling, award-winning titles in its “Unreal” series, including “Unreal Tournament 3” for PC, PlayStation®3 and Xbox 360®. The first two games in Epic’s “Gears of War” franchise have sold more than 13 million copies and won more than 50 game of the year awards. The third installment, “Gears of War 3,” sold more than 3 million copies within its first week of release, catapulting the franchise beyond $1 billion in lifetime sales. Epic’s Unreal Engine 3 holds more than 20 industry technology awards and powers many bestselling games. Additional information about Epic can be obtained at www.epicgames.com.
Epic, Epic Games, Gears of War, Gears of War 3, Unreal, Unreal Development Kit, UDK, Unreal Engine, UE3, and Unreal Tournament are trademarks or registered trademarks of Epic Games, Inc. in the United States of America and elsewhere. All other trademarks are the property of their respective owners.