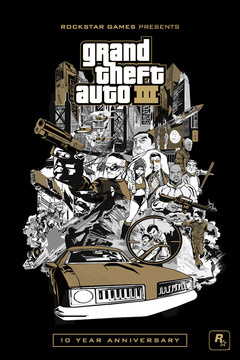 Rockstar Games is celebrating Grand Theft Auto III’s 10th anniversary with a special edition that will be coming to an array of portable devices for Android, and for the iPhone 4S.

“Grand Theft Auto III showed us the potential of open world games,” said Sam Houser, Founder of Rockstar Games in an official release. “It helped set the vision for the company, and we have been expanding on those possibilities with every game ever since.”

GTA III will be released on the iPad 2 and the iPhone 4S. That’s it. If you’ve got an iPhone 4, then sucks to be you i guess. =) It’s coming to more Android phones, such as Droid X2, HTC Evo 2, LG Optimus 2X, Motorola Atrix, and Samsung Galaxy S2. It’s also headed to Android tablets like Acer Iconia, Asus Eee Pad, Motorola Xoom, and Samsung Galaxy Tab 10.1.