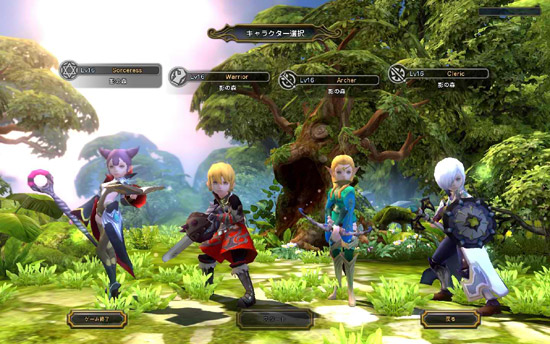 What class to choose in Dragon Nest? Cant make up your mind what path to take? Check out this Class guide by 187Ben:

When you reach lv 15, you could go to the class tutor and complete quests for secondary class. Here I will make a detailed introduction about  all the 8 classes in Dragon Nest. Hope it helps you choose the class you wanna be.

Warrior– Sword Master
Advantages: Their attack speed is faster than axes and hammers. Their common attacks will bring stiff effects to monsters. Aside from that, they have many continuous skills, gorgeous combos, strong survival ability in a nest instance and can interrupt monsters’ skill.

Disadvantages: They have a small area of effect and low damage output (Monsters in Dragon Nest have much higher physical defense than magical defense).With all melee skills, sword masters are unable to cope with a group of monsters. Their magical skills cannot deal enough damage, either.

Position in a Group: They are pioneers of a group instead of main damage dealers. Aiding archers and sorceresses, they often assault remote magical monsters. They can even levitate enemies. It is recommended they use physical parry. PK fans can train both physical and magical skills.

Warrior-Mercenary
Advantages: They have a larger area of effect and higher damage than sword masters in melee combats. Owning buffs and stiff effects, they cannot be knocked down easily. Additionally, they are strong in both Single PK and Group PK with rich combined skills.

Position in a Group: They mainly differ from sword masters in Group PK. A good mercenary is like a sharp blade inserting the rear of enemies. Working with paladins, they disturb the rear and hold off damage dealers freely. Their buffs and debuffs can also take effect in Group PK.

Archer- Acrobat
Advantages: Their agile manipulation and nimble moves can be felt through jumps and attacks at the beginning of the game. They have the most counter-escape skills, splendid combo skills and strong survival ability in map challenge and Group PK. Their acceleration skills (Speed up attack and skill-casting) are awesome to a group while challenging a map. They even have the highest critical strike rate when their agility reaches a high level.

Disadvantages: Compared with Bow Masters, they deal less damage and have a smaller area of effect. They are easily interrupted while releasing spells and attacks as a result of their long range. They are a class mainly depending on equipment and controls, because they have few damaging and diversionary skills. Good equipment can compensate for little damage, while bad equipment nearly doesn’t cause any damage.

Position in a Group: Similar to Elemental Lords, most of their skills are melee ones, which are effective in the face of a single boss. In the later stage, if they have good equipment, they can also deal massive damage in challenging maps as well as a single boss. With high maneuverability and variability, they are a class that can be strengthened by equipment and controls.

Archer-Bowmaster
Advantages: They deal the highest damage in the early stage. Their puncture and AOE attacks together with long range allow players to enjoy the excitement of dealing massive damage and handle a PK easily. In the later period, their DPS is almost equivalent to Elemental Lords’. They also take the role of containing a boss’ hatred.

Disadvantages: Although bow masters have good skills, easy controls and excel at map challenge and PK, they don’t have any counterattack skills, so they cannot fight back as long as enemies get close. If they are encircled by a group of enemies, they are bound to die. As it takes them a long time to cast physical skills, they are easily assaulted. In comparison with other classes, they have lower HP and physique, thus they need good equipment.

Position in a Group: They can be considered as movable cannons with lasting high damage in the rear of a group. They are responsible for stimulating a boss’ hatred, because they deal massive damage and are far from the boss. It is safer for them to do that. It is recommended that they transfer to the magical school after they get excellent equipment.

Advantages: They have the highest DPS in Dragon Nest. A strong elemental lord means a DPS dealer in instance. Having various slowdown and debuff skills, they can deal with various classes. They are an entertaining class with a variety of combined skills. They are also main DPS dealers in Group PK, their flash dodge and forceful flash dodge help them run away from a battlefield quickly.

Disadvantages: They have a short attack range and most of their skills are melee ones, so they are required to possess stronger controls and consciousness than melee classes. Having weak survival ability, they are more likely to attract bosses if they don’t control hatred well. Additionally, they have few dodge and escape skills, they may die easily.

Position in a Group: They are placed in an awkward position. Regardless of PK or challenging maps, they should stand in the rear, but they have to get close to enemies to cast skills and control DPS output. Briefly, they should slower the opponent from the rear and seize an opportunity to move forward and deal damage. Players can gain pleasure from both melee and magical combats. It is recommended that they pay main attention to fire element and take ice element as the secondary one. Elemental lords are not as powerful as Bow Masters even if they have a good command of the ice element.

Sorceress- Force User
Advantages: They have a variety of diversionary skills which can be cast upon bosses in a nest, in addition to a large area of effect. Therefore, force users are the most popular with groups while challenging a large nest. Their MP recovery skill is in demand most. Furthermore, their time-pause skill can be a decisive factor in Group PK.

Disadvantages: Although force users cause massive damage in challenging maps. Their ability in Single PK is not strong enough. More often than not, they often avoid frontal conflict, and escape until the opponent is in cooldown, only at that time do they release skills. However, if two sides run away, the PK will end in a draw unlimitedly.

Position in a Group: No matter in map challenge or Group PK, they act as controllers and damage dealers. At present, most groups need force users, especially their MP recovery skill. Thus, they take the role of helping recovering MP in the later stage.

Cleric- Priest
Advantages: Priests are the only class capable of mastering various healing skills, boosting attack and defense and removing diverse debuffs. Meanwhile, they can use another kind of power- Light Element by worshiping Light God, so they also have DPS output. Moreover, they have high defense and physique, parry skill and strong survival ability, so they can challenge the Abyss instance on their own.

Disadvantages: All of their skills are used to recover HP and buff. Therefore, they will let players down in Single PK. However, in Group PK, they can do nothing but help recover HP and cast holy aurora or anything else.

Position in a Group: They are famous for aiding. Naturally, they will take on the role of assistants. Find a proper position and seize an opportunity to cast holy aurora, they will also deal massive damage. Note that priests should dedicate to aiding skills, or else nobody will team them up. Please invite priests to your group as frequently as possible, after all you will lose lives easily without them. Priests are indeed a selfless class.

Cleric-Paladin
Advantages: They are a melee class having the best defense and physique, the most parry skills, unique invincible skills, high damage, a healing skill, the strongest survival ability and the fastest attack speed. In Group PK, they can pin down 2-3 enemies and launch counterattacks in the enemy rear. They can also deal with various opponents and keep alive in a Single PK.

Disadvantages: They are deficient in AOE skills and are easy to levitate enemies. They are not popular in challenging maps except exploring a nest. It is a bit boring to train paladins in the beginning. They are short of diversionary and chase skills. Fighting against them is more likely to end in a draw, unless you are very strong.

Position in a Group: Don’t punch monsters randomly while challenging a map in a group. They have the ability to resist bosses. They are a nightmare for enemies in Group PK, for they often hobble enemies and disturb their rear. They are advised to lay stress on defensive skills in the later period.