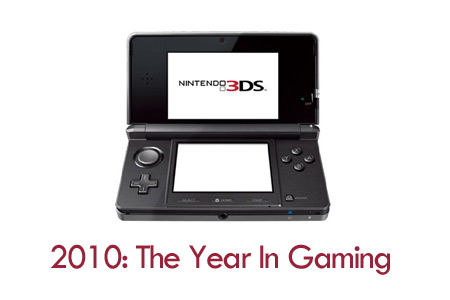 2010 was a great year for gaming, not only on the console and PC fronts but for mobile and casual gaming as well. Here are some of our favorites here at Codamon.com: Sony and Microsoft releasing their own motion controllers, Nintendo’s 3DS announcement, a ton of new games, Angry Birds and gaming other hits on the iPad, World of Warcraft’s Cataclysm expansion, NBA 2k11’s dominance of the basketball genre, Duke Nukem revived, and the Activision-Infinity Ward founders legal battle.

Check out the biggest news from the gaming world in 2010 from around the web:

1UP writes: “The year 2010 was one of realignment for the videogame industry. Microsoft and Sony further realigned their priorities to include mass audiences; the market itself continued to realign in which such a way that games like Angry Birds became megahits; and, of course, Infinity Ward founders Jason West and Vince Zampella realigned themselves with a new company.” [link]

IGN says: “Every year is jammed-pack with gaming news, and 2010 wasn’t any different. Since the industry is no longer dependent on E3 as its biggest press event, gamers are treated with news literally 24 hours a day year-round. In 2010, we saw Bungie sign a 10-year publishing deal with Activision, the announcement of Batman: Arkham City, Mass Effect is finally coming to PlayStation 3, and many more!” [link]

Kotaku says: “What would the new year be without a massive graphical detailing of the highs and lows of the year previous? Let’s take a look back at 2010, giant infographic style.” [link]