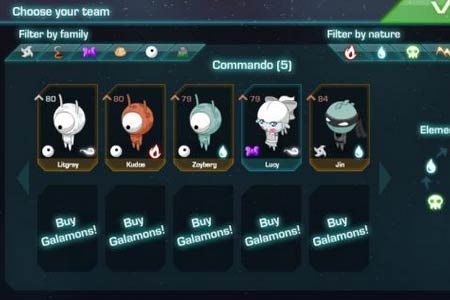 Galamon is a new facebook social game from Morphee Games. The objective behind Galamon is simple enough: Beat the opponent. When starting out, Galamon players are granted a handful of creatures called Galamons which are classified as ninjas, pirates, cute, “ekeko,” aliens, or zombies. Each of the different Galamon creature types have different looks and attack animations. Each also has their own stats and abilities.

While having Galamon with numerically higher stats are good, note that each Galamon has an elemental ability that goes beyond the stats. For ex., one of your Galamon might increase the health of all other Galamon of the same element, while another will increase all team members’ attack speed. In addition, there is an elemental display that shows which elements – water, fire, wind, earth, poison – are stronger against others.