My Empire is a new social game on facebook by Playfish/EA. My Empire follows similar games by Playfish in where you build your city, ask friends for help in building achievements and basically move up the game ladder. But instead of a restuarant or a hotel, you’re actually building an empire in ancient roman times, complete with Ancient Wonders! 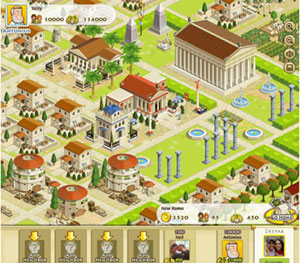 Here are some cheats, guides, tips and tricks for Playfish’s My Empire game on facebook:

More Gold
Just like in other playfish games, visit your neighbors/friends citiues everyday for those bonus money.

The last tab in the build window will list a number of historical buildings that you can choose to construct in your Roman city. Each has its own cost and mousing over the building will show you the corresponding reward for happiness and fame points. It will also show you which levels it will be unlocked and what building is currently being built. Below the list will indicate the materials that you currently have which will serve as your guide when you start collecting them to finish the building.

Inspect Progress
Looking at your city, your buildings will show an “Inspect Progress” button which will show your progress. The example below shows we are building the Stonehenge.
The complete the construction, it is a mix of having the number of needed materials and asking for a special material from your neighbors. For the stonehenge, you need 2 stones, 3 bronze and 10 units of tar.

You will have to construct the village quarry to produce stone and village mine for bronze. They produce 1 unit every 24 hours. For the tar, this is where you need to ask your neighbors to send them to you as gifts. Send them yourself since it is expected that they will be needing it as well or write them a message and ask for some. You are sure to get them gifts. If you have at least 10 neighbors, then you can collect this in no time.
As you progress, you will get to unlock more Wonders. Some will ask for new materials such as sandstone, iron and softwood. You then need to build the Town Quarry, Town Mine and Town Mill. These buildings will need you to research at the academy.