Dark Roast Media has unleashed its newest facebook social game called Exorcists vs. Demons, and if the latter has their way, the Earth may be doomed sooner than expected through the fire and brimstone that is the Rockapocalypse. Yep, Rockapocalypse. Rock and Roll RPG on facebook! Awesome! 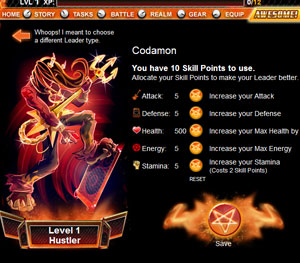 Exorcists vs. Demons will soon have boss battles similar to Castle Age, but dont expect the game to deviate from the other leveling up games on Facebook. Although that rock and roll vibe definitely ups the game’s atmosphere.

Play Facebook Games: Exorcists vs. Demons after the jump.

Set in a rock and roll style most similar to that seen in Guitar Hero III, this mafia-style RPG give players the choice to pick whether to fight for a rather buxom young exorcist named Alice to prevent the end of the world, or join the legions of hellspawn in creating a guitar riff so powerful that it will change the course of humanity. – Insidefacebook

Play Facebook Games: Exorcists vs. Demons by clicking on this link.