IGN sat down with Civilization V lead designer Jon Shafer and producer Dennis Shirk and discussed about changes and reclaiming some key franchise concepts. Jon’s previous experience as a modder in the Civilization community has given him a healthy sense of what’s possible in the world of Civilization, while his work at Firaxis on Civilization IV and its expansions have helped him keep his innovations consistent with the overall franchise. I just hope he captures what made Sid Meier’s games so appealing and addictive.

IGN writes: “The most obvious change is the move to a hex-based map. While it was initially a bit jarring to jettison the age-old square tiles, the new format makes for maps that look much more natural. Rather than having lots of awkward right angles and confusion about whether water tiles joined only at the corner are passable, the new hexes make movement much clearer and remove the chance for diagonal movement exploits. The move to hexes was prompted by Jon’s love of the old SSI classic, Panzer General. Like that game, the new Civilization will only allow one military unit per hex, which eliminates the stacks of doom that have been such a franchise fixture. And since that means only one unit can garrison a city, combat has moved away from city sieges and instead focuses on movement and position outside of the cities. 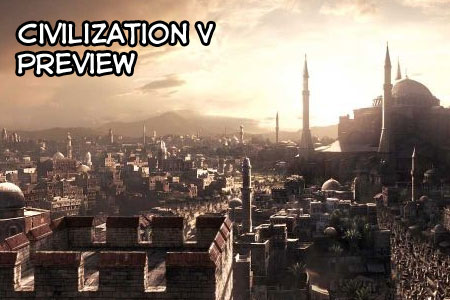 Naturally, it’s not all about making war, so diplomacy has been overhauled as well. Diplomacy has a wider focus but has also been streamlined a bit. In terms of focus, the team wanted to create a game where the player’s main interactions weren’t always driven purely by competition. The inclusion of unaligned city states that can be used as leverage against larger powers helps move diplomacy in a new direction. By removing the religion and espionage systems, Firaxis hopes to focus diplomacy more on specific strategic situations and less on the exploitation of more arbitrary game elements.

The game has obviously also been influenced by Civilization Revolution for the consoles, particularly in terms of the overall interface. While the new game still maintains a level of complexity that’s appropriate for the series and the PC platform, the interface elements have been folded back to reveal more of the playing area. Likewise, the game will help players focus on the information they need to see. Small icons will appear along the edge of the screen to give players notifications of important events or opportunities, and you can instantly snap to any of the relevant locations to get your own appraisal of the situation.

It’s all an attempt to make the game more accessible without compromising on the depth or details. It’s also a great way to communicate information to the players without drawing them out of the game world or completely stalling the game’s progress. Additionally, if you haven’t set a research priority or a production order for one of your cities, the end turn button will instead take you to those screens.

Of course, not all of Civilization’s PC fans had a positive view of the broad style or humor of Revolution, so they’ll be happy to know that the designers are moving away from the silliness of the console game to create a more somber PC sequel. The game will still have the trademark Civilization personality, but it won’t be as exaggerated as in previous installments. The advisors are making a comeback, for instance, but won’t be pushing each other aside or shouting over each other.

It’s not surprising given Jon’s background that the new version of Civilization will be even more moddable than Civ IV. All the tools have been taken to a whole new level, so the more you know about XML and programmable DLL, the more you’ll be able to achieve with the game. More importantly, the game itself will contain a browser for full community interaction, so you can search for, discuss, install and rate mods all from within the game shell. Firaxis will maintain a small bit of control over this and will rely on player flags to evaluate objectionable content.”