Looks like the basketball videogame war between 2k Sports and EA Sports just took a surprising turn when NBA 2k8 lead gameplay designer Mike Wang,who jumped ship to EA to work on last year’s NBA Live 10, is now back with the 2K team citing a bit of displeasure on how things are run at EA Sports. Not surprising since EA’s NBA Live franchise just hasnt been able to compete with 2K Sports basketball series. Here’s the article from ESPN: “EA Sports’ media blitz for “NBA Live 10” was led front and center by their acquisition of “NBA 2K8’s” lead gameplay designer Mike Wang. But now, one year later, 2K Sports is back to announce Wang’s shocking return to the company and to the “NBA 2K” franchise after only releasing one game for the competition. 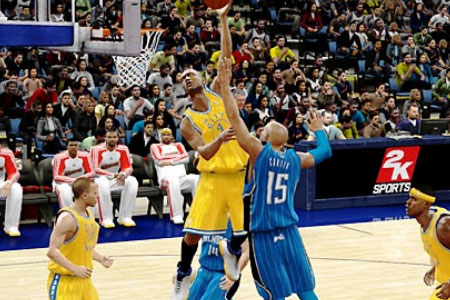 “When I went over there (to EA), a lot of it was for personal reasons. I wanted to try something new, try a new challenge. But after being there and spending some time over at EA, it was clear that they do things a different way, and in a way it’s just inefficient and just not the place to be to make the best games,” said Wang in a recent conference call with ESPN to announce his return. “When I went there, I immediately missed VC (Visual Concepts), and it’s just one of those things where I tried to stick it out as long as I could, but I wanted to come back. With some of the creative decisions over at EA, it just made it difficult to stay there. They just want to make a different game than I had a vision for. So I reached out to (2K’s senior vice president of sports development) Greg Thomas and he was gracious enough to have me back.

“For me, it was interesting to be at EA, but it was just hard to get stuff done.”

Added Greg Thomas: “He was there, he didn’t really care for it, and now he’s back where he belongs.”

Wang returns to his role as lead gameplay designer of the “NBA 2K” series, and the team is already hard at work on “NBA 2K11.”

“I don’t want to get too much into specifics for ‘2K11,’ but the focus over here has always been to make the best basketball sim,” said Wang. “That’s something that the guys over at EA, they don’t always have that same focus. They want to make a different kind of game this year.”

Thomas agrees: “Over at EA, you have so many levels of management, and you have somebody up there looking at unit sales and how 2K is kicking their asses, so now they want to change things in a great way because they can’t afford to sell this many units through a three-year plan or a five-year plan. Here, we’re always trying to do the same thing, we’re always trying to make the best basketball simulation we can.

“I think EA is going through an identity crisis with their basketball sim.”

And according to designer Erick Boenisch, EA’s identity crisis, coupled with the return of Wang, looks to tip the scales even further in 2K’s direction. “Whenever you get the opportunity to add someone like Mike, that’s what our team feeds off of and the results will be a much better NBA product,” he said. “It’s created a lot of excitement.”

“Mike coming back enables us to try and push as many new ideas as we can into the forefront,” added longtime “NBA 2K” producer Rob Jones. “This is something we always do, but having Mike just makes us better at doing it.”

But Thomas sees even bigger things in store for “NBA 2K11” now that he finally has his team back together.

“I think it makes our team stronger, and already, I think you’ll see our team is, I wouldn’t say cockier, but already I’ve read some documents from these guys and I hear things like ‘Best basketball game ever.’ This team isn’t usually that way, but already, there’s a little more strut to our step.”

When reached for comment, an EA Sports spokesman told ESPN: “We appreciate Mike’s contribution to the ‘NBA Live’ franchise and wish him well in future endeavors. ‘NBA Live 11’ pre-production is well underway and the team is poised to raise the bar on quality, innovation and authenticity.”

Looks like this rivalry just got a lot more interesting. “