Google has unveiled their newest Android Phone called the Nexus One. It does look hot, with a beautiful screen and fast processor that even an IPhone 3GS would be envious of. But the question to gamers like me is: How does the Google Nexus One phone fare in mobile gaming? 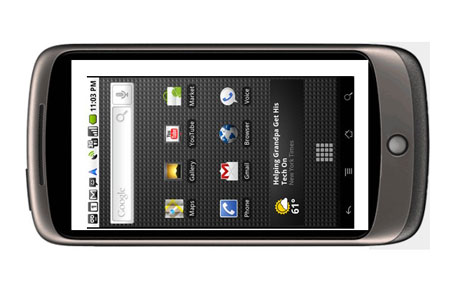 Kotaku chimes in : “While the Nexus One does have a faster processor and a larger, higher resolution screen than the iPhone 3GS, there are several shortcomings that will likely keep it from achieving even a fraction of the success the iPhone has had in the gaming sector.

First off, there’s the operating system. The Nexus One runs version 2.1 of Google’s Android operating system, an upgraded version of 2.0, making its debut on the new device. When Android-enabled phones were first introduced, several major players in the mobile gaming market took notice. Namco quickly got Pac-Man up and running, and Activision followed suit with Guitar Hero.

Things were looking up, but then in November of last year, mobile-gaming giant Gameloft significantly cut their support for the platform, with the company’s finance director Alexandre de Rochefort saying that “It is not as neatly done as on the iPhone. Google has not been very good to entice customers to actually buy products. On Android nobody is making significant revenue.”

A quick look at the sort of games available on the Android Market currently shows simple titles that would be perfectly at home on 2-3 year-old mobile phones. Mind you they’re much prettier and probably run smoother, but overall the current selection is weak.

Gaming doesn’t seem to be as strong focus for Google on the operating system or the Nexus One itself. Scouring the internets for information on the phone’s announcement today I didn’t see any specific mention of the phone as a gaming machine, so while the system is certainly more than powerful enough to handle some advanced portable titles, poor support for gaming in the past might have already poisoned the waters for many developers.

Then there is the question of controls. With no keyboard and only a tiny trackball serving as a physical controller, the Nexus One relies on its touch screen as a primary user interface. So does the iPhone, of course, but the iPhone has a multitouch capable screen, while the Nexus One lacks this functionality. This means that some of the more complex iPhone games that rely on a combination of virtual on-screen controls wouldn’t work on the phone.

One could argue that the Nintendo DS touch screen is single input as well, but the DS has a directional pad plus shoulder and face buttons to accent the touching.”

In a nutshell, The Google Nexus One does not look all that attractive as a mobile gaming device. There’s nothing wrong with being “just” a mobile phone though.