Modern Warfare 2 has a relative short single player campaign, thankfully we have the spec ops mode which lengthens the gameplay considerably and is a whole lot of fun! 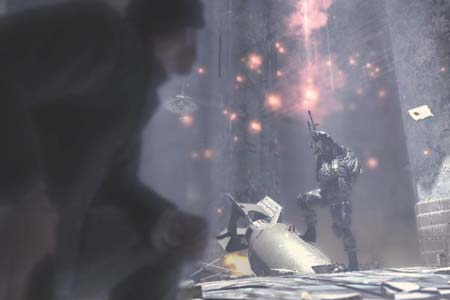 Two heads are better than one. The Spec Ops missions are designed for two people (especially on Veteran). There’s absolutely *NO* excuse for not having a second player because there is split-screen. With large televisions being so cheap (a 36″ cathode ray tube is cheap), use split-screen if you need the help. All you need to do is create another PSN ID or Xbox Gamertag.

This is an relatively easy mission, especially if you have two people. You technically don’t need to change your weapons either. Simply use the initial SCAR-H and tap (one or two shots) for each target. You and your partner should divide the targets and approach the course left and right (line abreast). Remember to use COD’s “aim snap” feature. It makes running this course quickly much, much easier (and mandatory for three stars). For the targets outside the house, one player should try for the two rooftop targets while the other (on the right usually) can handle the ones in the windows and doors. You should run out of SCAR-H bullets by the time you clear
the rooftop’s targets. Attack the final two waves on the ground with the USP 45 once your SCAR-H is dry and sprint to the exit. You don’t need the 22 seconds from Infinity Ward — just the under 35 seconds for your stars. Note that the Desert Eagle, the USP.45, and the assault rifles will penetrate targets. If you line up two terrorist targets, you can kill both with one shot and move on.