Avatar by is a stunning visual masterpiece from the director of the Terminator 1 and 2 and Titanic, James Cameron. Avatar opens December 17 in local Philippine IMAX theaters in SM North Edsa and Mall of Asia (MOA). Avatar will also be showing in all SM Digital Theaters and in all SM Cinema Branches nationwide. 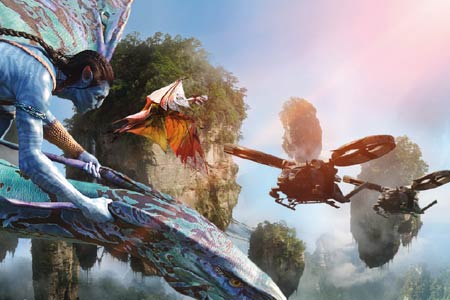 In the future, Jake, a paraplegic war veteran, is brought to another planet, Pandora, which is inhabited by the Na’vi, a humanoid race with their own language and culture. Those from Earth find themselves at odds with each other and the local culture.

Avatar Reviews
The Hollywood Reporter writes: “A fully believable, flesh-and-blood (albeit not human flesh and blood) romance is the beating heart of “Avatar.” Cameron has never made a movie just to show off visual pyrotechnics: Every bit of technology in “Avatar” serves the greater purpose of a deeply felt love story.”

Empire gushes: “It’s been twelve years since “Titanic,” but the King of the World has returned with a flawed but fantastic tour de force that, taken on its merits as a film, especially in two dimensions, warrants four stars. However, if you can wrap a pair of 3D glasses round your peepers, this becomes a transcendent, full-on five-star experience that’s the closest we’ll ever come to setting foot on a strange new world. Just don’t leave it so long next time, eh, Jim?”

Variety says: “Avatar is all-enveloping and transporting, with Cameron & Co.’s years of R&D paying off with a film that, as his work has done before, raises the technical bar and throws down a challenge for the many other filmmakers toiling in the sci-fi/fantasy realm.”