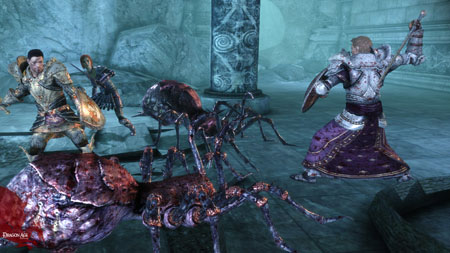 Dragon Age: Origins gets a new downloadable content pack in Return to Ostagar, due out this holiday season for all three platforms with a price tag of 400 Microsoft points, 400 BioWare points, or $4.99 depending on your platform of choice.

“We are very proud of the phenomenal launch of Dragon Age: Origins and we’re pleased to announce the next installment of downloadable content that will be available to fans of the game,” said Ray Muzyka, Group General Manager, RPG/MMO Group of EA, and Co-Founder, BioWare. “The Return to Ostagar DLC pack is a prime example of BioWare’s commitment to give fans a game that continuously offers new experiences and further enriches a storyline that has already received critical acclaim and positive feedback from the players.”

At the beginning of Dragon Age: Origins, a battle between the forces of good and evil at Ostagar leave the Grey Wardens nearly extinct and young King Cailan seriously dead. In Return to Ostagar, players revisit the scene of the slaughter, exacting revenge, uncovering secrets, and seeking out the arms and armor of the fallen king. New loot!