Welcome to my second anime pvc figure unboxing after Figma’s Rin Tousaka. This time, we will be looking at Max Factory Figma’s Kanu Uchou from the Ikkitousen series. 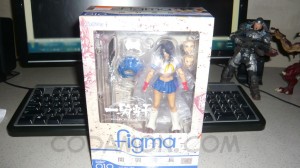 I’m starting to get used to how these boxes weigh and how they look. The Figma Kanu Uchou box is decorated with an cream asian parchment like pattern with a dragon design running on the sides. You can see the Kanu figure from outside the box as well as make out some extra faces, hands and ripped versions of her dress and skirt. Looks like Kanu has more of an alternate look than Rin. 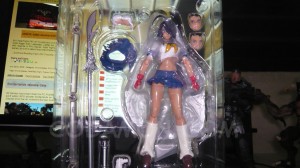 Opening the box, you will see the figure with a bit of extra plastic protection because of Kanu’s long hair. She has long plastic hair that twirls around her like a serpent. The end has a joint of sorts so you can adjust where it ends up. Looks cool imho.

Unlike Rin, you wont get arm parts but Kanu comes with her trusty spear,2alternate faces, a ton of hands, ripped version of her clothes (fanservice!)plus the usual Figma base and stand. 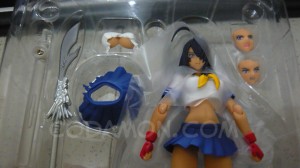 So, i tried changing Kanu’s face and clothes and one thing really struck me: you really need to be extra careful around these figmas as even though they’re not glass figures, they’re not exactly made for people with big inexperienced hands with figures as small as these. So after a bit of pressure adjustments, i finally got Kanu with a new look: 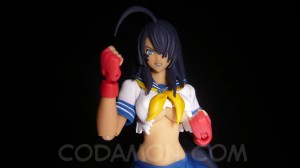 Here are some other additional poses by Figma Kanu Uchou: 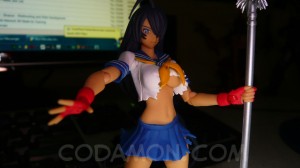 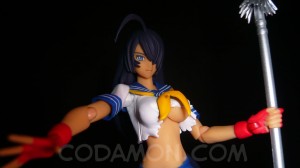 So, there you have it: the unboxing of Max Factory Figma Kanu Uchou from Ikkitousen. Hope you liked it as much as i enjoyed playing around with the poses.

But let me leave you with a picture of both Figma Rin Tousaka and Figma Kanu Uchou posing for the camera: 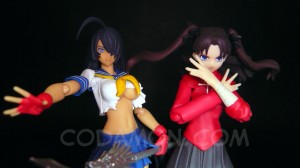 Thank you for reading, see you at my next anime pvc figure unboxing!