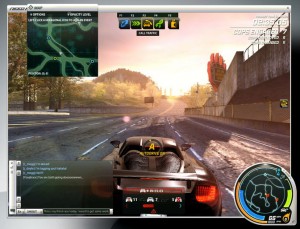 EA says: “Key to the concept of NFS World Online is the user interface which has been built from the ground up to take advantage of the PC architecture. Instead of a traditional console view of a game, we’re using a user-selectable gadget interface designed specifically for the PC. The system allows the gamer to choose which components of the interface they want to add to their game. The gadgets are really flexible and offer a wide range of display options: docked/undocked, floating in the game window or just sitting outside of the game space. A lot of gamers now have more than one monitor so you could keep the game window entirely clean and then have all the gadgets sit in the other monitor. We think it’s about time PC gamers had games that allowed them to arrange their information their way.”

Need for Speed World Online will be a downloadable free-to-play title is being co developed by EA Black Box and EA Singapore.