The Total War series has been one of my favorites ever since i played Shogun: Total War on a rental PC many years ago. I went on to play Medieval, Rome and Medieval 2 and still found the series unique and challenging. Now, Sega and Creative Assembly are releasing what I’m hoping to be the definitive version of the series in Empire: Total War for the PC. 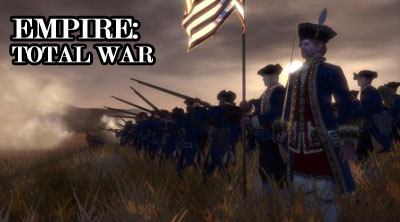 Here are the PC game reviews for Empire: Total War:

Empire Total War Reviews
IGN [9.5/10] says: “Empire: Total War is a masterful combination of all the things that I love about strategy games — a great setting, a first-rate presentation, tactics that reward maneuver, and a strategic layer that requires flexibility in your plans. The 18th century is a perfect setting for the game design, and the new naval battles, while a tad clunky, finally deliver the series’ one missing component. The new strategic options are nicely balanced by increased convenience and legibility across the map. True, the end game still drags a bit and there are some small, rough edges in the tactical battles, particularly at sea, but none of those errors compromise the incredible amount of fun you’ll have developing your infrastructure, forging alliances and leading your forces into battle.

Ultimately, Empire Total War maintains the excellent fusion of thoughtful turn-based empire building and dramatic tactical action that the series is known for, and it layers many new features on those foundations to reach awesome new heights. I’ve never given a score this high before, but that’s only because I’ve never played a game as thoroughly enjoyable as Empire Total War.

Simply put, if you’re a fan of strategy games, this is one game you must have in your collection.”

Eurogamer [9/10] writes: “In some ways, it’s the closest we’ve come to the enormous social novel from the period after that which Empire chronicles: it’s a Tolstoy-esque War and Peace of a game. Its problems may be the inevitable problems of trying something with such sheer scope. As such, if you want the breathtaking vision of the game, you have to accept the flaws in the details – for now, at least.”