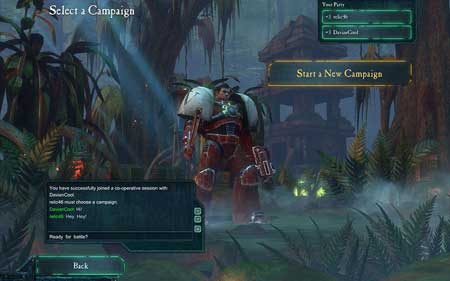 IGN says: Relic has made a lot of bold decisions with Warhammer 40,000: Dawn of War II, some of which are sure to turn off parts of the RTS hardcore base, the most obvious being the elimination of base building. Yet as players we can’t continue to accept the same kinds of games, complain about stagnation, and then turn our backs when somebody does something different. In the campaign portion of the game Relic blended elements of action-RPGs and real-time strategy games and succeeded in producing a new and entertaining kind of experience.”

More Dawn of War 2 Reviews after the jump.

Game Informer writes: “It feels weird to me to not be falling head over heels for a Relic title out of the gate, to be honest. Still, this is an amazingly visceral title with a second-to-none presentation that delivers some of the best tactical action we’ve seen to date. I applaud the developers for moving the staid RTS genre in a new direction, even if I feel that Dawn of War II stumbles a little bit along the way.”