Google announced Chrome, its new Web browser project, via a 38-page comic book. According to the Chrome comic, drawn by acclaimed comic artist and writer Scott McCloud, the upcoming opensource browser is based on the opensource rendering engine WebKit, the very same engine used by Apple’s own Safari browser and Google’s own Android mobile-phone operating system. 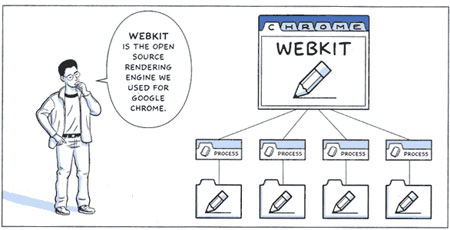 According to the comic, which appeared in the mailboxes of some European writers and developers today and was rapidly scanned in and posted under the Creative Commons licensing regime, Google will be posting information about the browser at google.com/chrome, which was inactive at the time this story was written. (According to a since-removed post on McCloud’s LiveJournal, the official launch is scheduled for Wednesday.)

Whoo a better browser! High fives all around!

The comic describes the Chrome browser as one designed to take advantage of today’s Web, which features rich applications that run within a Web-browser interface. It features a tab-based interface with the tabs on top, above the browser’s URL window and control buttons. According to the comic, the browser features a fast JavaScript engine from “the V8 team” in Denmark. Each browser tab runs as its own process and is sandboxed for stability and security reasons.